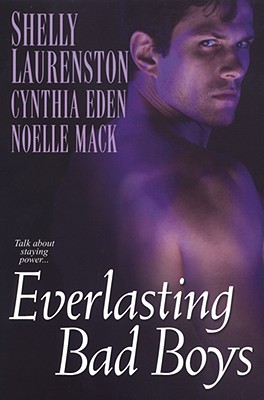 They're bad boys--with that little something extra. Sexy, wild, out-of-this-world talents that can leave any woman feeling weak at the knees (among other body parts), they're the ones to call when you want pleasure that lasts. . .and lasts. . .
Can't Get Enough Shelly Laurenston
Even for a dragon, Ailean the Wicked has a bad reputation. For 150 years he's been renowned for his fighting prowess, but now he's got a new conquest in mind--a gorgeous dragoness known as Shalin the Innocent. Ailean suspects she's anything but. And while he's saving her from her enemies, he plans to prove that, even in human form, a bad-boy dragon can show a girl a good time that's truly off the scale. . .
Spellbound Cynthia Eden
No witch in her right mind would summon an immortal soul-hunter to her aid, but Serena Tyme needs Luis D'Amil's help to destroy the warlock who's stalking her coven. And she's willing to pay any price he names. . .especially when the tall, dark, sexy-as-hell assassin shows her he can work some sensual magic of his own. . .
Turn Me On Noelle Mack
Finally, Beth Danforth has found a man who can flip her switch. That's because supersexy Justin Watts, CEO of SpectraSign, is literally made of light. His dazzling, custom-built body can't ever wear out. And talk about energy--Beth can't get enough of the guy. The sex is electrifying. The love will never fade away. . .