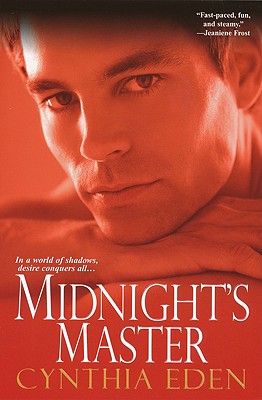 In this sexy, gripping novel, Cynthia Eden draws readers deeper into the realm of the Others--vampires, shifters, and sinfully attractive demons whose powers are matched only by their dark hungers. . .
Tall, dark, and formidable, Niol Lapen is the last demon on earth most people would ask for a favor, yet the sexy little reporter who wanders into his club dares to do exactly that. Holly Storm already knows too much about his kind, and Niol has no wish to help her get in deeper over her head. But working alongside her may be the only way to stop a killer, even as it ignites a primal desire unlike anything he's known.
Holly has seen firsthand what Niol is capable of, but that doesn't frighten her nearly as much as her body's instinctive reaction to him, or the wild, fierce passion that would tempt her to follow him through hell itself. Something evil and relentless is prowling the streets of Atlanta. And as Holly's search leads her into danger that even Niol could never have predicted, she'll uncover a secret that could rip her world apart. .
"Fast-paced, fun, and steamy, "Midnight's Master" is a page-turning treat " --Jeaniene Frost.