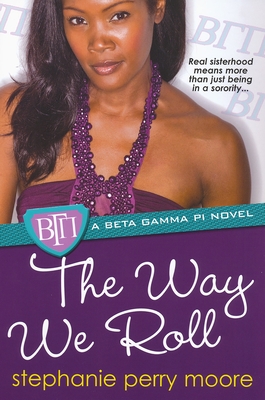 Pledging wasn't in Malloy Murray's plans, but it might be exactly what she needs. . .

Malloy Murray has never had any close girlfriends, so she wasn't really feeling the whole "sorority" thing, but Malloy has to pledge?her mother, the National President of Beta Gamma Pi, is counting on it. After meeting some of the sisters at a party, the idea of becoming a Beta isn't actually so bad. And when Malloy runs into Kade, the guy she's been crushing on, things heat up fast, especially when Sharon--a Beta sister and Kade's girlfriend--vows to do everything to keep Malloy away from Kade and out of the sorority. Now to survive the school year, Malloy's got to look deep into her heart to find the real meaning of sisterhood.

Stephanie Perry Moore is the author of the Perry Skky Jr., Yasmin Peace, Payton Skky, Laurel Shadrach, Carmen Browne, and the Faith Thomas Novelzine™ series. She also has written four adult titles, including her newest release, Wearing My Halo Tilted. Currently, she is an Executive Producer of Georgia Sky, a DVD series from Tyler Perry’s 34th Street Films based on her previous works. She lives in the greater Atlanta area with her husband, Derrick, and their three children.
Loading...
or
Not Currently Available for Direct Purchase