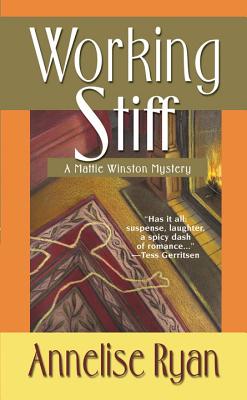 When Mattie Winston catches her husband Dr. David Winston receiving some very special loving care from R.N. Karen Owenby, she quits her job and moves out. Mattie's best friend Izzy offers her a place to stay and suggests she'd be a natural as deputy coroner. Now, instead of taking patients' pulses, Mattie's weighing their hearts and livers. But Mattie's first homicide call turns out to be for none other than Nurse Karen, and even though she saw her ex in a heated argument with the newly deceased the night before, she refuses to believe David could be a killer. Keeping mum about what she saw, Mattie is also left speechless by the sight of hunky Detective Steve Hurley. . . From learning the ropes on her new job to sorting out her feelings about her ex and dealing with her growing attraction to Detective Hurley, Mattie's in deep water and in danger of sinking quickly, especially when she places herself dead center in the path of a desperate--yet determined--killer. . . Praise for Annelise Ryan and Working Stiff "Sassy, sexy, and suspenseful, Annelise Ryan knocks 'em dead in her wry and original Working Stiff." --Carolyn Hart, author of Dare to Die "Make way for Mattie Winston, the funniest deputy coroner to cut up a corpse since, well, ever." --Laura Levine, author of Killer Cruise "Ryan brings her professional expertise to her crisp debut." --Publishers Weekly

Annelise Ryan is the pseudonym for the author of the Mattie Winston mysteries and another mystery series. She has written more than 200 published articles, worked as a book reviewer for Barnes & Noble, and is an active member of Mystery Writers of America and International Thriller Writers. She currently works as a registered nurse in an ER. She can be reached at mattiewinston.com.
Loading...
or
Not Currently Available for Direct Purchase