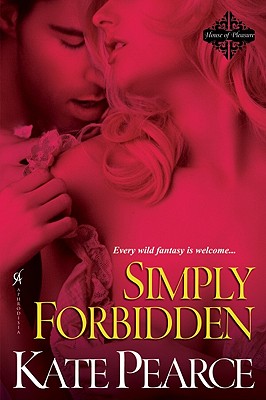 Your most scorching desires come blissfully true at Madame Helene's Pleasure House--an elite brothel in Regency England where passion has no limits. . .

With an unconventional upbringing and a reputation as a shameless flirt, Lisette Delornay-Ross is not your typical young lady of the ton. Unlike her peers, she is not afraid to follow her desires. And what she desires is Major Lord Gabriel Swanfield. . .

Returned to England after his harrowing ordeal as a war prisoner, Gabriel has shunned society. When Lisette brazenly confronts him, he feels an overwhelming stirring of lust. He's sure she would never entertain the illicit desires he indulges at Madame Helene's. But when he kisses her, he discovers her thirst for pleasure--and adventure--matches his. . .

"This book has something for everyone: hot sex scenes, a sexy hero with a tragic past, a smart and compassionate heroine, intrigue, danger and Regency London at its most decadent "
-"Romantic Times "

"Can you say HOT? Well it doesn't get much hotter than Simply Sexual."
-"Simply Romance Reviews.

Kate Pearce was born into a large family of girls in England, and spent much of her childhood living very happily in a dream world. Despite being told that she really needed to 'get with the program', she graduated from the University College of Wales with an honors degree in history.

A move to the USA finally allowed her to fulfill her dreams and sit down and write that novel. Along with being a voracious reader, Kate loves trail riding with her family, 'western style' in the regional parks of Northern California. Kate is a member of RWA and is published by NAL, Kensington Aphrodisia, Ellora's Cave, Cleis Press and Virgin Black Lace/Cheek.
Loading...
or
Not Currently Available for Direct Purchase