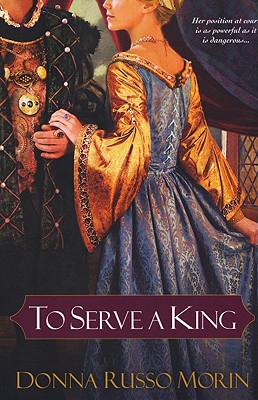 To Serve a King

From her earliest days, Genevieve Gravois has known one fact above all: Francis I, king of France, is her enemy. Raised by her embittered aunt after her parents' deaths, Genevieve has been schooled in things no woman should know: how to decipher codes, how to use a dagger and a bow, and how to kill. For Henry VIII has a destiny in mind for the young girl--as his most powerful and dangerous spy.
When the time is ripe, Genevieve enters the magnificent world of the French court. With grace to match her ambition, she becomes maid of honor to Anne de Pisseleau, King Francis's mistress. Yet neither the court--which teems with artistry and enlightenment as well as intrigue--nor Francis himself are at all what Genevieve expected. And with her mission, her life, and the fate of two kingdoms at stake, she will be forced to make deadly decisions about where her heart and her ultimate loyalties lie.
Praise for Donna Russo Morin's The Courtier's Secret
"As opulent and sparkling as Louis XIV's court and as filled with intrigue, passion and excitement as a novel by Dumas. . .a feast for the senses." --"Romantic Times "(4 stars)
"Vivid, delightful, spirited. . .a page-turner as smooth as fine cognac." Steven Manchester, author of "The Unexpected Storm"
"A wonderfully spun gem of a story." --"Armchair Reviews"
Reading Group Guide Inside.