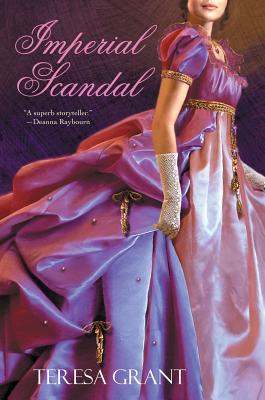 Amid the treachery of war and the whirl of revelry, no one is what they seem. . .

Nights filled with lavish balls. . .lush, bucolic afternoons. . .. Removed to glamorous Brussels in the wake of Napoleon's escape from Elba, Intelligence Agent Malcolm Rannoch and his wife, Suzanne, warily partake in the country's pleasures. But with the Congress of Vienna in chaos and the Duke of Wellington preparing for battle, the festivities are cut short when Malcolm is sent on a perilous mission that unravels a murderous world of espionage. . .

No one knows what the demure and respectable Lady Julia Ashton was doing at the château where Malcolm and a fellow British spy were ambushed. But now her enigmatic life has been ended by an equally mysterious death. And as the conflict with Napoleon marches toward Waterloo, and Brussels surrenders to bedlam, Suzanne and Malcolm will be plunged into the search for the truth--revealing an intricate labyrinth of sinister secrets and betrayal within which no one can be trusted. . .

"A brilliantly multilayered mystery and a must-read for fans of the Regency era." --Publishers Weekly

"Shimmers like the finest salons in Vienna." --Deborah Crombie

"Glittering balls, deadly intrigue, sexual scandals. . .the next best thing to actually being there!" --Lauren Willig

Teresa Grant studied British history at Stanford University and received the Firestone Award for Excellence in Research for her honors thesis on shifting conceptions of honor in late fifteenth century England. She lives in the San Francisco Bay Area, where she is on the board of the Merola Opera Program, a professional training program for opera singers, coaches, and stage directors. She is currently at work on her next book chronicling the adventures of Malcolm and Suzanne Rannoch.
Loading...
or support indie stores by buying on