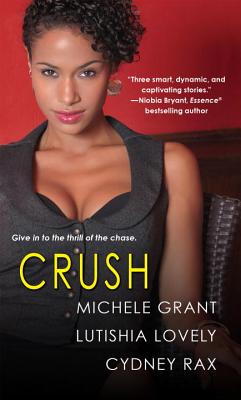 Some people flirt, others admire from afar, but one thing's for sure--there's nothing hotter than a crush that tempts you to take a chance...

Jayla has always played it safe, personally and professionally. Finding the perfect cup of coffee is about the most exciting thing in her life. But one look at free-spirited café owner Jason, and she's suddenly inspired to venture out of her comfort zone...

From One Lover to Another Cydney Rax

Lorraine Eafford is done with bad boys.  She's ready for someone nice and reliable--someone just like her new co-worker, Wendell.  But her ex won't take no for an answer, and Lorraine is about to show him just how bad this good girl can be...

Michele Grant is a writer, lover of all things purple, and speaker of mind. Her popular blog, Black ’n Bougie (blacknbougie.com), is an irreverent look at pop culture, people, politics & personal stuff...with a bougie twist. The blog won the 2010 Black Weblog Award for Best Series and was named a finalist in 2011 for the categories Best Writing in a Blog, Best Series, and Blog of the Year. She was a finalist two years in a row for RT Book Review’s Best Multicultural romance. Her articles have been posted on Essence.com, UptownMagazine.com, Blackenterprise.com, and ForHarriet.com. You can find her tweeting as @OneChele, on Facebook, at MicheleGrant.net, or via email at michele@michelegrant.net.

Lutishia Lovely burst onto the literary scene with Sex In the Sanctuary and now, more than a dozen books later, hasn’t even thought about slowing down. When not writing contemporary fiction, she lends her muse to her alter-ego, Zuri Day, and writes steamy romances.  But all work and no play makes Tish a dull girl, so she knows how to put down the pen and pick up a good time—which isn’t hard to do in southern California’s wine country, where she resides. Lutishia loves to hear from readers, so visit her online at LutishiaLovely.com, or on Facebook and Twitter @ lutishialovely.

Cydney Rax became obsessed with becoming a writer after reading Terry McMillan’s Disappearing Acts. Her author dreams were realized through her eyebrow-raising debut novel, My Daughter’s Boyfriend.  Her novels include My Husband’s Girlfriend, Scandalous Betrayal, Brothers & Wives, and My Sister’s Ex (cited by Essence® as one of 2009’s best reads). She has also contributed to the anthologies Crush and Reckless. Born and raised in Detroit, Cydney graduated from Cass Technical High School and earned an undergraduate degree from Eastern Michigan University. She resides in Houston. Visit her online via Facebook, at www.cydneyrax.com, or email her at booksbycyd@aol.com.

"Talented Grant entices, captivates and mesmerizes her readers." --Romantic Times on Heard It All Before

".  .  .you'll find yourself drawn to Rax's juicy tale of out-of-order Buppies in love and lust." --Essence® on My Husband's Girlfriend
or
Not Currently Available for Direct Purchase
Copyright © 2020 American Booksellers Association