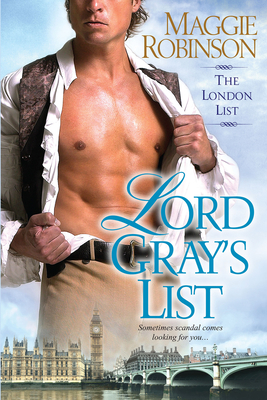 From duchesses to chamber maids, everybody's reading it. Each Tuesday, "The London List" appears, filled with gossip and scandal, offering job postings and matches for the lovelorn--and most enticing of all, telling the tales and selling the wares a more modest publication wouldn't touch. . .
The creation of Evangeline Ramsey, The London List saved her and her ailing father from destitution. But the paper has given Evie more than financial relief. As its publisher, she lives as a man, dressed in masculine garb, free to pursue and report whatever she likes--especially the latest disgraces besmirching Lord Benton Gray. It's only fair that she hang his dirty laundry, given that it was his youthful ardor that put her off marriage for good. . .
Lord Gray--Ben--isn't about to stand by while all of London laughs at his peccadilloes week after week. But once he discovers that the publisher is none other than pretty Evie Ramsey with her curls lopped short, his worries turn to desires--and not a one of them fit to print. . .
Praise for Maggie Robinson's Novels
"Steam rises from the pages." --"Romantic Times "(4 stars) on "Mistress by Marriage"
"A fun read that will keep you turning pages into the night." --"Affaire de Coeur " (4.5 stars) on "Mistress by Mistake.