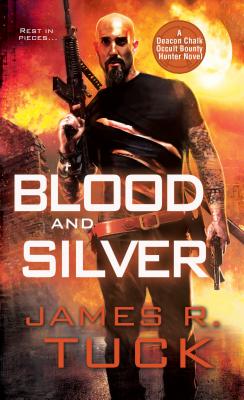 He hasn't met a monster yet that could give him a scare. With ice in his veins, silver hollow-points in his chambers, and an innate ability to rise from the dead, what's to fear? The answer may be something he doesn't want to face. . .

Deacon Chalk normally has no trouble telling innocent victims from real monsters. So protecting an abused pregnant were-dog is a no-brainer. . .until a vicious lycanthrope leader and his brotherhood target Deacon, other shape-shifters, and any humans in their way. Suddenly, Deacon is outnumbered, outgunned, and unsure who--or what--to trust. The only edge he has left is a weapon hungry for his soul and his most savage impulses. And using it will exact a price even this hell-raising hunter fears to pay. . .

Praise for Blood and Bullets

"James R. Tuck's debut novel delivers a fast-paced, action-filled story that kicks off his new series with a bang. If Dirty Harry and Anita Blake had a love child, he would be Deacon Chalk." --Jenna Maclaine, author of Bound by Sin

James Tuck is a professional tattoo artist whose work has appeared in numerous publications. He currently lives with his wife, children, and several dogs in Georgia, where he owns and operates a tattoo parlor. His thoughts on writing, and updates about Deacon Chalk’s next adventure, can be found at www.JamesRTuck.com.
or
Not Currently Available for Direct Purchase
Copyright © 2020 American Booksellers Association