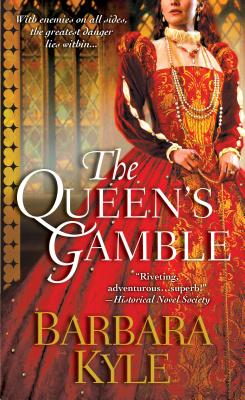 Young Queen Elizabeth I's path to the throne has been a perilous one, and already she faces a dangerous crisis. French troops have landed in Scotland to quell a rebel Protestant army, and Elizabeth fears once they are entrenched on the border, they will invade England.

Isabel Thornleigh has returned to London from the New World with her Spanish husband, Carlos Valverde, and their young son. Ever the queen's loyal servant, Isabel is recruited to smuggle money to the Scottish rebels. Yet Elizabeth's trust only goes so far--Isabel's son will be the queen's hostage until she completes her mission. Matters grow worse when Isabel's husband is engaged as military advisor to the French, putting the couple on opposite sides in a deadly cold war. . .

"Starts strong and doesn't let up. . .Kyle's latest is extremely accessible for readers unfamiliar with the series." --Publishers Weekly

Barbara Kyle, a classically trained actor, enjoyed a successful career in Canadian television and theater before turning her hand to writing fiction. She is the author of the popular Thornleigh Saga, including The Queen's Lady, The King's Daughter, and The Queen's Captive. She and her husband live in Ontario, where she teaches popular writing seminars and workshops and gives lectures on Tudor history. She welcomes visitors at her website: www.barbarakyle.com.
Loading...
or
Not Currently Available for Direct Purchase