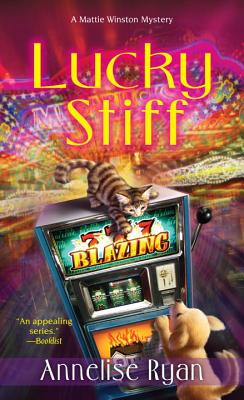 It's Christmas Day in the sleepy town of Sorenson, Wisconsin, but instead of unwrapping presents, deputy coroner Mattie Winston is at the burnt remains of a house, where a charred body has been found. The victim is none other than Jack Allen--a paraplegic who recently won a huge casino jackpot. Upon closer inspection, Mattie and detective Steve Hurley are convinced Jack was murdered to steal his winnings, giving the phrase Black Jack a whole new meaning. . .

But as Mattie investigates, even her cutting-edge forensic skills keep coming up short in a case with as many suspects as twists. After her odds-on-favorite turns up dead, Mattie and Hurley must race to find a killer before another victim cashes in his chips.

"A puzzler of a mystery. What a thrill ride!" --Jenn McKinlay

"Has it all: suspense, laughter, a spicy dash of romance. . ." --Tess Gerritsen

"The funniest deputy coroner to cut up a corpse since, well, ever." --Laura Levine

Annelise Ryan is the pseudonym for the author of the Mattie Winston mysteries and another mystery series. She has written more than 200 published articles, worked as a book reviewer for Barnes & Noble, and is an active member of Mystery Writers of America and International Thriller Writers. She currently works as a registered nurse in an ER. She can be reached at mattiewinston.com.
or
Not Currently Available for Direct Purchase
Copyright © 2020 American Booksellers Association