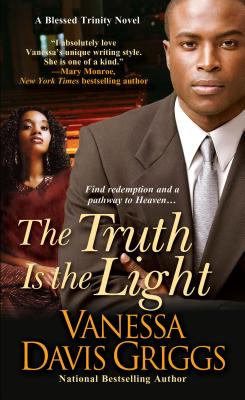 The Truth Is The Light (Blessed Trinity #6)

I absolutely love Vanessa's unique writing style. She is one of a kind.
—Mary Monroe, New York Times bestselling author

"Full of crazy church politics and a huge cast, Griggs keeps this on-going story alive by addressing the challenges of living by Biblical rules with homespun humor."
—Publishers Weekly

As the son of a well-known minister, Clarence Walker knows his decision to leave his father's flock and join Pastor George Landris's mega-church ministry is controversial. But little does he suspect it will ignite a firestorm of revelations that will shake the heart of the congregation—and his very own family. . .

From a long-buried secret that will bring the paternity of not one, but two women, to light, to a parishioner whose long awaited love match may be thwarted by an unexpected source, hidden truths are coming to the surface. But most shocking is that Clarence's own father, Reverend Marshall Walker, may not be the pious figure he claims to be. And since evidence of his transgressions lies in the hands of his arch nemesis, it's only a matter of time before Reverend Walker's life—and his church—falls like a house of cards.

"A beautiful, hip, and spiritual retelling of one of the most memorable and redemptive stories in the Bible."
—Freshfiction.com on Redeeming Waters

"A smart novel that addresses an issue that many in the church shy away from--divorce--with frank realism."
—Library Journal on Practicing What You Preach

VANESSA DAVIS GRIGGS is a motivational speaker and the author of over a dozen novels which include The Blessed Trinity series: Blessed Trinity, Strongholds, If Memory Serves, Practicing What You Preach, Goodness and Mercy, The Truth Is the Light, The Other Side of Goodness, The Other Side of Dare, and The Other Side of Divine. A recipient of several awards, this married mother of three adult sons, mother-in-law of one daughter, and grandmother of four adorable granddaughters and one handsome grandson lives in Birmingham, Alabama. Visit her online at VanessaDavisGriggs.com.
Loading...
or support indie stores by buying on
(This book is on backorder)