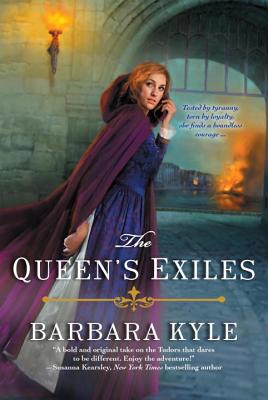 1572. Europe is in turmoil. A vengeful faction of exiled English Catholics is scattered about the continent, plotting to overthrow Queen Elizabeth and install her cousin Mary, Queen of Scots on the throne. And in the Netherlands, the streets are red with the blood of those who dare to oppose the brutal Spanish occupation. But amid the unrest, one resourceful young woman has made a lucrative enterprise... Scottish-born Fenella Doorn salvages crippled vessels. It is on one of these ships that she meets wealthy Baron Adam Thornleigh. Secretly drawn to him, Fenella can't refuse when Adam enlists her to join him in war-torn Brussels to help find his traitorous wife, Frances-and the children she's taken from him. But Adam and Fenella will put their lives in peril as they attempt to rescue his young ones, defend the crown, and restore the peace that few can remember. With eloquent and enthralling finesse, Barbara Kyle illuminates one of history's grimmest chapters. The Queen's Exiles breathes new life into an extraordinary age where love and freedom could only be won with unmitigated courage. "Barbara Kyle owes me two nights of sleep for writing such an enthralling book." --Christine Trent, author of Lady of Ashes "Fenella Doorn, savvy and brave, is an unforgettable heroine." --Antoni Cimolino, Artistic Director of the Stratford Festival "A brilliant book-a page-turner of a thriller with a backbone of love and loyalty in treacherous Tudor times." --Deborah Swift, author of The Gilded Lily.

Barbara Kyle, a classically trained actor, enjoyed a successful career in Canadian television and theater before turning her hand to writing fiction. She is the author of the popular Thornleigh Saga, including The Queen's Lady, The King's Daughter, and The Queen's Captive. She and her husband live in Ontario, where she teaches popular writing seminars and workshops and gives lectures on Tudor history. She welcomes visitors at her website: www.barbarakyle.com.
Loading...
or support indie stores by buying on