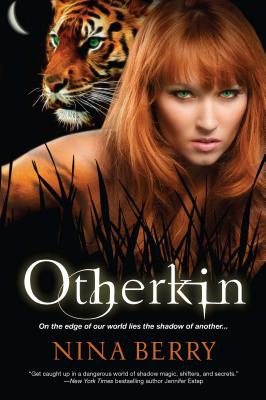 I thought I knew myself. Then I met Caleb.

Dez is a good girl who does as she's told and tries not to be noticed. Then she rescues a boy from a cage, and he tells her secrets about herself. Now inside her burns a darkness that will transform her.

Everything is about to change--and neither Caleb, nor the Otherkin, nor those who hunt them, are prepared for what Dez will unleash.

"Be prepared to lose some sleep. Otherkin is full of non-stop action and suspense, and you're not going to be able to put it down!" --Brigid Kemmerer, author of the Elemental series

"Get caught up in a dangerous world of shadow magic, shifters, and secrets." --New York Times bestselling author Jennifer Estep

"Berry's debut offers just the right combination of  high-stakes exploits and steamy love scenes to keep readers up until the wee hours.  .  .ripe with issues that will resonate with readers. From body image to friendship, first love and betrayal, [OTHERKIN] explores the truth that no matter who or what you are, there's no escaping the politics of high school." – Kirkus Reviews

Inspired by novels she loved as a teen, she sold her debut YA paranormal novel OTHERKIN to KTeen in 2011. When not writing, Nina loves to travel, read, and tweet links about saving big cats in the wild. She’s a member of the Society of Children’s Book Writers and Illustrators.
Loading...
or support indie stores by buying on