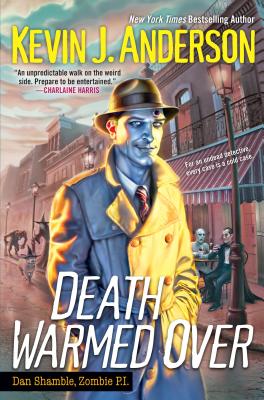 "A darkly funny, wonderfully original detective tale."--Kelley Armstrong
Single Dead Detective Seeks Clue
Ever since the Big Uneasy unleashed vampires, werewolves, and other undead denizens on the world, it's been hell being a detective--especially for zombie P.I. Dan Chambeaux. Taking on the creepiest of cases in the Unnatural Quarter with a human lawyer for a partner and a ghost for a girlfriend, Chambeaux redefines "dead on arrival." But just because he was murdered doesn't mean he'd leave his clients in the lurch. Besides, zombies are so good at lurching.
Now he's back from the dead and back in business--with a caseload that's downright unnatural. A resurrected mummy is suing the museum that put him on display. Two witches, victims of a curse gone terribly wrong, seek restitution from a publisher for not using "spell check" on its magical tomes. And he's got to figure out a very personal question--Who killed him?
For Dan Chambeaux, it's all in a day's work. (Still, does everybody have to call him "Shamble"?) Funny, fresh, and irresistible, this cadaverous caper puts the P.I. in R.I.P. . ..with a vengeance.
"Wickedly funny, deviously twisted and enormously satisfying. This is a big juicy bite of zombie goodness. Two decaying thumbs up "--Jonathan Maberry
"Anderson has become the literary equivalent of Quentin Tarantino in the fantasy adventure genre."--"The Daily Rotation"
"An unpredictable walk on the weird side. Prepare to be entertained." --Charlaine Harris.

Kevin J. Anderson is the author of the Star Wars: Jedi Academy trilogy, the Star Wars novel, Darksaber, and the comic series The Sith War for Dark Horse comics and the science fiction novel Blindfold. He has edited several Star Wars anthologies, including Tales From The Mos Eisley Cantina. He is a New York Times bestselling author and lives in California with his wife, Rebecca Moesta.
or
Not Currently Available for Direct Purchase
Copyright © 2020 American Booksellers Association