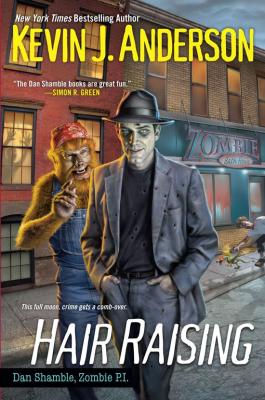 The fur really flies when a serial scalper stalks the supernatural citizens of the Unnatural Quarter, targeting werewolves--and what's sadder than a chrome-domed lycanthrope? Zombie P.I. Dan Shamble is on the case, trying to stop an all-out gang war between full-time and full-moon werewolves. As he combs through the tangled clues to hunt down the bald facts, things get hairy fast.

Shamble lurches through a loony landscape of voodoo tattoo artists, illicit cockatrice fights, body builders assembling make-your-own-human kits, and perhaps scariest of all, crazed fans in town for the Worldwide Horror Convention. Yet the reign of hair-raising terror grows longer. If Shamble can't snip this off at the roots, the whole world could end up howling mad.

Praise for the Dan Shamble Novels

"Prepare to be entertained."--Charlaine Harris

Kevin J. Anderson is the author of more than one hundred novels, 51 of which have appeared on national or international bestseller lists. He has over 23 million books in print in thirty languages. He has won or been nominated for numerous prestigious awards, including the Nebula Award, Bram Stoker Award, the SFX Reader’s Choice Award, the American Physics Society’s Forum Award, and New York Times Notable Book. By any measure, he is one of the most popular writers currently working in the science fiction genre.

Anderson has coauthored thirteen books in Frank Herbert's classic DUNE universe with Herbert's son Brian.  His epic science fiction series, “The Saga of Seven Suns,” was followed by a nautical fantasy trilogy, “Terra Incognita,” about sailing ships, sea monsters, and the crusades. He has written numerous novels in the Star Wars and X-Files series and coauthored Prodigal Son with Dean Koontz. With Rush drummer and lyricist Neil Peart, Anderson has written the novelization for the new Rush album Clockwork Angels. For the Horror Writers Association, he edits the Blood Lite anthologies of humorous horror stories. He is also a prolific writer of comics and graphic novels.

Anderson's research has taken him to the top of Mount Whitney and the bottom of the Grand Canyon, into the Andes Mountains and the Amazon River, inside a Minuteman III missile silo and its underground control bunker, onto the deck of the aircraft carrier Nimitz, onto the floor of the Pacific Stock Exchange, and behind the scenes at FBI Headquarters in Washington, DC. He has climbed all 54 mountain peaks in the Colorado Rockies higher than 14,000 feet, and he has completed more than 300 miles of the Colorado Trail. He lives with his wife, writer Rebecca Moesta, in their mountain home in Colorado. Visit him at www.wordfire.com.
Loading...
or
Not Currently Available for Direct Purchase