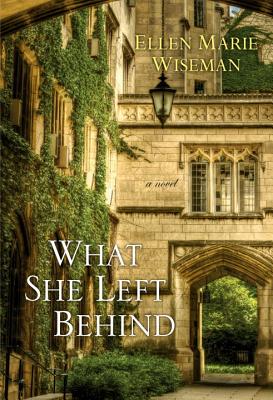 In this stunning new novel, the acclaimed author of The Plum Tree merges the past and present into a haunting story about the nature of love and loyalty--and the lengths we will go to protect those who need us most.

Ten years ago, Izzy Stone's mother fatally shot her father while he slept. Devastated by her mother's apparent insanity, Izzy, now seventeen, refuses to visit her in prison. But her new foster parents, employees at the local museum, have enlisted Izzy's help in cataloging items at a long-shuttered state asylum. There, amid piles of abandoned belongings, Izzy discovers a stack of unopened letters, a decades-old journal, and a window into her own past.

Clara Cartwright, eighteen years old in 1929, is caught between her overbearing parents and her love for an Italian immigrant. Furious when she rejects an arranged marriage, Clara's father sends her to a genteel home for nervous invalids. But when his fortune is lost in the stock market crash, he can no longer afford her care--and Clara is committed to the public asylum.

Even as Izzy deals with the challenges of yet another new beginning, Clara's story keeps drawing her into the past. If Clara was never really mentally ill, could something else explain her own mother's violent act? Piecing together Clara's fate compels Izzy to re-examine her own choices--with shocking and unexpected results.

Illuminating and provocative, What She Left Behind is a masterful novel about the yearning to belong--and the mysteries that can belie even the most ordinary life.

"Ellen Marie Wiseman's provocative and realistic images of a small German village are exquisite. The Plum Tree will find good company on the shelves of those who appreciated Skeletons at the Feast, by Chris Bohjalian, Sarah's Key, by Tatiana de Rosnay, and Night, by Elie Wiesel." --NY Journal of Books

"The meticulous hand-crafted detail and emotional intensity of The Plum Tree immersed me in Germany during its darkest hours and the ordeals its citizens had to face. A must-read for WWII Fiction aficionados--and any reader who loves a transporting story." --Jenna Blum, New York Times bestselling author of Those Who Save Us

"Ellen Marie Wiseman weaves a story of intrigue, terror, and love from a perspective not often seen in Holocaust novels." --Jewish Book World

"A haunting and beautiful debut novel." --Anna Jean Mayhew, author of The Dry Grass of August

Ellen Marie Wiseman was born and raised in Three Mile Bay, a tiny hamlet in Northern New York. A first generation American, Ellen has traveled frequently to visit her family in Germany, where she fell in love with the country’s history and culture. A mother of two, Ellen lives peacefully on the shores of Lake Ontario with her husband and three dogs.

When Izzy first arrives at Willard, she’s afraid to go inside

the old buildings because they remind her of visiting her

mother in the psychiatric ward. She also has a difficult time

handling the contents of the old suitcases because they remind

her of the dead and dying. Some people would find

the abandoned asylum fascinating, while others would stay

away. Would you want to go inside the buildings? Would

you want to go through the old suitcases?

Before coming to live with Peg and Harry, Izzy cut herself

to deal with her emotions. Self-harm is most common in

the ages of twelve and twenty-four. Have you ever

heard of self-injury as a way of dealing with emotional pain,

anger, and frustration? Why do you think some people hurt

themselves as a way of coping? What do you think would

have happened to Izzy if she had lived during Clara’s time?

Displaying opposite ends of the spectrum when it comes to a

protect her, while Shannon’s and Clara’s mothers do nothing

to protect them. Discuss the maternal instinct. Do you think

it’s stronger in some women than in others? Do you think the

difference is due to circumstances, as in the way women are

brought up, or do you think the difference is due to genetics?

Clara tries everything she can think of to get out of Willard.

Is there anything else she could have tried?

New York State has sealed the medical records of former

law should be changed?

How do you think Izzy changed over the course of the

novel? How did Clara change? What were the most important

events that facilitated those changes?

because of Clara’s father’s stories, and partly due to the era,

when emotional outbursts were often seen as a sign of mental

illness. Why do you think Dr. Roach refused to release

Clara even though Bruno confirmed the truth about why

she was there? Why do you think Dr. Roach committed

Bruno to the asylum? Do you think Dr. Roach was more

worried about his reputation and his job, or concealing the

fact that he took Clara’s child?

Izzy refused to visit her mother in prison because she was

afraid. Do you think she was angry with her mother, or just

Clara refused to go along with the arranged marriage to

James because she was in love with Bruno. She had no idea

her father would send her to an insane asylum. Hindsight is

always 20/20 and, in Clara’s time, women were still subject

to the whims of their husbands and fathers, but what would

you have done in that situation? Would you have obeyed

your parents’ wishes and married James? Would you have

why her mother shot her father until she read her

mother’s letters. Can you think of an instance in your life

that would have turned out differently if you’d had more information?

Do you think most people jump to conclusions,

or that they try to find out all sides of a story?

Nurse Trench presented a tough exterior while hiding a soft

interior. How did you feel about her when you first met

her? How did you feel about her when she was an old

woman? Do you think Nurse Trench could have tried

harder to help Clara while she was at Willard? What could

Izzy feels like nothing will ever change when it comes to

bullying. What do you think? What can be done to make

those changes? Do you think we’ve made progress when it

comes to bullying, or do you think things have gotten

Clara is sterilized after she gives birth, because Dr. Roach

genes. Do you think it was right for doctors to make that decision

for patients who were considered mentally ill? Do

cannot reproduce? How far do you think we’ve come when

chance to escape. Would you have been able to stand being

nailed inside a coffin if it meant a chance to be free?

During the flood in the electroshock therapy room, someone

grabs Clara underwater. Who do you think it was?

What She Left Behind is composed of two interweaving

day. Discuss the structure of each narrative. Did you enjoy

the alternating stories and time frames? What are the

strengths and drawbacks of this format?

Which “voice” did you prefer, Izzy’s or Clara’s? Is one more

or less authentic than the other? If you could meet one of

the two characters, which one would you choose?

How are Clara and Izzy the same? How are they different?

What do you think Izzy’s future looks like? What about

Clara and her daughter’s future?