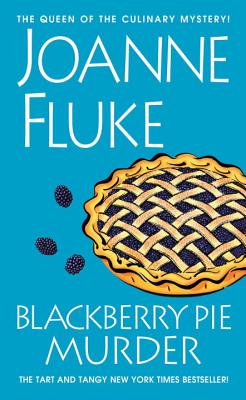 It's been a sleepy summer for the folks of Lake Eden, Minnesota. In fact, it's been a whole four months since anyone in the Swensen family has come across a dead body--a detail that just made the front page of the local paper. And that means Hannah Swensen can finally focus on her bakery. . .or can she? Life is never really quiet for Hannah. After all, her mother's wedding is a little over a month away and guess who Delores put in charge of the planning? Yet just when Hannah believes her biggest challenge will be whether to use buttercream or fondant for the wedding cake, she accidentally hits a stranger with her cookie truck while driving down a winding country road in a raging thunderstorm. Hannah is wracked with guilt, and things get even worse when she's arrested. . .for murder But an autopsy soon reveals the mystery man, his shirt covered in stains from blackberry pie, would have died even if Hannah hadn't hit him. Now, to clear her name, Hannah will have to follow a trail of pie crumbs to track down the identity of the deceased, find a baker who knows more about murder than how to roll out a perfect pie crust--and get herself to the church on time. . . Indulge In Joanne Fluke's Criminally Delicious Hannah Swensen Mysteries Red Velvet Cupcake Murder "Culinary Cozies Don't Get Any Tastier Than This Winning series." --Library Journal "Loaded with mouthwatering recipes and clever plotting, the latest Hannah Swensen mystery delights." --RT Book Reviews "If your reading habits alternate between curling up with a good mystery or with a good cookbook, you ought to know about Joanne Fluke." --The Charlotte Observer Cinnamon Roll Murder "Fans of this wildly popular series will not be disappointed. Fluke has kept this series strong for a long time, and there is still plenty to enjoy for foodie crime fans." --Booklist Devil's Food Cake Murder "Fabulous." --Publishers Weekly Apple Turnover Murder "The ever popular Fluke writes engaging cozies with one part great characters, one part gentle story, and three parts the best recipes in the genre." --Library Journal Cream Puff Murder "Entertaining and sprinkled with tempting recipes. It's a sweet treat of a novel." --The Star Tribune (Minneapolis, MN)

JOANNE FLUKE is the New York Times bestselling author of the Hannah Swensen mysteries, which include Double Fudge Brownie Murder, Blackberry Pie Murder, Cinnamon Roll Murder, and the book that started it all, Chocolate Chip Cookie Murder. That first installment in the series premiered as Murder, She Baked: A Chocolate Chip Cookie Mystery on the Hallmark Movies & Mysteries Channel. Like Hannah Swensen, Joanne Fluke was born and raised in a small town in rural Minnesota, but now lives in Southern California. Please visit her online at www.JoanneFluke.com
or
Not Currently Available for Direct Purchase
Copyright © 2020 American Booksellers Association