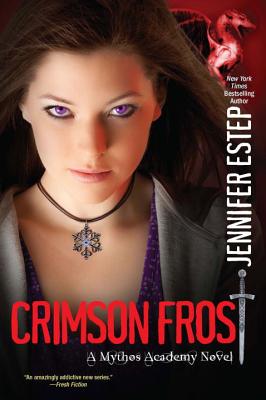 For a moment, a face flashed before my eyes--the most hideous face I'd ever seen. No matter how hard I tried to forget what had happened, I saw him everywhere I went. It was Loki--the evil god that I'd helped set free against my will.

I should have known that my first official date with Logan Quinn was destined to end in disaster. If we'd gotten into a swordfight, or been ambushed by Reapers, I'd have been more prepared. But getting arrested mid-sip at the local coffee hangout? I didn't see that one coming. I've been accused of purposely helping the Reapers free Loki from his prison--and the person leading the charge against me is Linus Quinn, Logan's dad. The worst part is that pretty much everyone at Mythos Academy thinks I'm guilty. If I'm going to get out of this mess alive, I'll have to do it myself. . .

Praise for the Mythos Academy series

"Kiss of Frost has just as much ass-kicking as the first book in the series." --Good Choice Reading

"Lots of twists and turns and a surprise ending will leave the reader breathless!" --RT Book Reviews on Kiss of Frost, 4 Stars

"It has literally everything: mystery, romance, mythology, boarding schools. What could be better?" --Simply Nerdy Book Reviews on Touch of Frost

New York Times bestselling author Jennifer Estep is constantly prowling the streets of her imagination in search of her next fantasy idea. Jennifer is the author of the Black Blade and Mythos Academy young adult urban fantasy series for Kensington. She writes the Elemental Assassin urban fantasy series for Pocket Books and is also the author of the Bigtime paranormal romance series. Jennifer is a member of Romance Writers of America, Science Fiction and Fantasy Writers of America, and other writing groups. Jennifer's books have been featured in Cosmopolitan, Entertainment Weekly, Southern Living, and a variety of other publications. To learn more about her, visit jenniferestep.com. You can also sign up for Jennifer's fan page on Facebook and follow her on Twitter and Goodreads.
or support indie stores by buying on
Copyright © 2020 American Booksellers Association