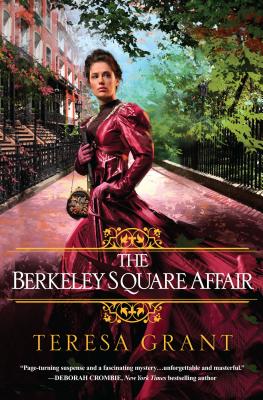 "Page-turning suspense and a fascinating mystery. . .unforgettable and masterful." Deborah Crombie, New York Times bestselling author
A stolen treasure may hold the secret to a ghastly crime. . .
Ensconced in the comfort of their elegant home in London's Berkeley Square, Malcolm and Suzanne Rannoch are no longer subject to the perilous life of intrigue they led during the Napoleonic Wars. Once an Intelligence Agent, Malcolm is now a Member of Parliament, and Suzanne is one of the city's most sought-after hostesses. But a late-night visit from a friend who's been robbed may lure them back into the dangerous world they thought they'd left behind. . .
Playwright Simon Tanner had in his possession what may be a lost version of Hamlet, and the thieves were prepared to kill for it. But the Rannochs suspect there's more at stake than a literary gem--for the play may conceal the identity of a Bonapartist spy--along with secrets that could force Malcolm and Suzanne to abandon their newfound peace and confront their own dark past. . .
Praise for Teresa Grant's The Paris Affair
"Twists and turns galore, swashbuckling adventure and suspense throughout. . .for readers in search of smart historical mysteries." Tasha Alexander, New York Times bestselling author
"I loved this book Superb "--Deborah Crombie, New York Times bestselling author
"Unravel the secrets and lies at the heart of an almost impenetrable mystery. . .thrilling " --Deanna Raybourn, New York Times bestselling author
"A treat. . .readers will be holding their breath and eagerly anticipating Grant's next story." --RT Book Reviews, 4 Stars
Praise for Vienna Waltz
"A brilliantly multilayered mystery and a must-read for fans of the Regency era." --Publishers Weekly on Vienna Waltz
"Absolutely gripping. . .historical intrigue at its finest." Deanna Raybourn
"Murder, deception, and romance, drenched in a richly detailed portrait of early nineteenth-century Vienna." C.S. Harris.