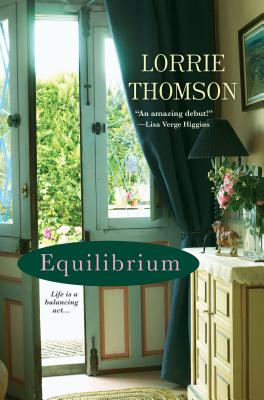 In the year since her husband died, Laura Klein's world has shifted on its axis. It's not just that she's raising two children alone--fact is, Laura always did the parenting for both of them. But now her fifteen-year-old daughter, Darcy, is dating a boy with a fast car and faster hands, and thirteen-year-old Troy's attitude has plummeted along with his voice. Just when she's resigning herself to a life of worry and selfless support, her charismatic new tenant offers what Laura least expects: a second chance.

Darcy isn't surprised her mom doesn't understand her, though she never imagined her suddenly acting like a love-struck teen herself. With Troy starting to show signs of their father's bipolar disorder, and her best friend increasingly secretive, Darcy turns to her new boyfriend, Nick, for support. Yet Nick has a troubled side of his own, forcing Darcy toward life-altering choices.

Exploring the effects of grief on both mother and daughter, Equilibrium is a thoughtful, resolutely uplifting novel about finding the balance between holding on and letting go, between knowing when to mourn and when to hope, and between the love we seek and the love we choose to give.

"Equilibrium is an emotional, complex, and deeply satisfying novel about the power of hope, love, and family. I couldn't put it down!" --Lisa Verge Higgins, author of One Good Friend Deserves Another

"Tender, heartbreaking and beautifully realistic. Fans of Anita Shreve will be riveted by this intense and compassionate story." --Hank Phillippi Ryan, Agatha, Anthony and Macavity-winning author

Lorrie Thomson is a member of the Women's Fiction Writers Association. She is the author of A Measure of Happiness. She lives in New Hampshire. When she's not reading, writing, or hunting for collectibles, her family lets her tag along for camping adventures, daylong paddles, and hikes up 4,000-footers. Readers can visit her website at lorrie-thomson.com.

How does Darcy see her mother at the beginning of the novel? Discuss the ways in which that perspective changes by the end. Talk about how Laura and Darcy switch roles over the course of the story.

Jack used to tell Laura that the most obvious reasons for a character’s actions were usually wrong, excuses masquerading as explanation. How does this apply to Laura’s relationship with Aidan? Laura says that Aidan is the polar opposite of her late husband. Do you think this makes him a good match for Laura? Why?

Compare Darcy’s and Troy’s memories of their father. How did his actions toward each of them influence their grieving?

How does Troy deal with his grief over Jack’s death? Laura believes she and her son are very much alike. Do you agree?

How do Laura and Darcy view Nick differently at the beginning of the story? Does this change by the story’s end?

What are the similarities between Darcy’s and Nick’s relationships to their fathers? In what ways do Darcy and Nick express the same emotions differently?

When Darcy first meets Nick, she thinks of herself as Daddy’s girl. Even though she’s embarrassed by how her father ended his life, she’s always looked up to him. Has her relationship with her father changed by the end of the story? How?

Laura mentions her mother, a woman who kept to herself and might’ve died from never having reached out to others. Do you think Laura sees herself in her mother? Are there similarities? By the story’s end, how has she learned to take her mother’s life as a lesson in reverse?

How had Laura tamped down her emotions in response to Jack’s? Is that coping mechanism now working in her favor or against her?

At the beginning of the story, Darcy’s best friend Heather is struggling with a secret that she later reveals to Darcy. The reveal forces a temporary wedge between them. How do keeping secrets, and the resulting fallout, factor into other aspects of the story?

Discuss how Darcy and Troy react differently to Aidan.

In what ways do Elle and Maggie support Laura? Why is Laura reluctant to tell them about her relationship with Aidan?

Laura stuck by Jack through his struggles with bipolar disorder. Do you have any personal experience with it? If so, how has that influenced the way you read Equilibrium? Do you think she could have—or should have—done anything different with Jack?