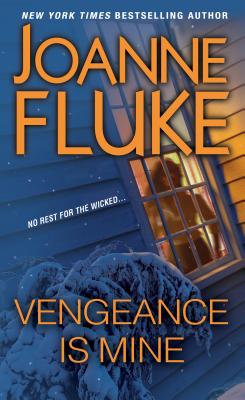 Vengeance Is Mine (Mass Market)

A KILLER IN THE DEAD OF WINTER…

As a family clinic administrator, Michele Layton has seen her share of suffering. But never anything like this. Not here in St. Cloud, Minnesota. A local activist has been found murdered, his body frozen like a statue and placed in a Winter Carnival ice sculpture display. Next a vicious hate crime puts a man in the ICU. And locked away in the Holy Rest mental ward, a deranged man of the cloth prays for more sinners to be punished—and waits for a sign from above. These seemingly random acts lead police chief Steve Radke to Michele, who could be the next pawn in a madman’s chess game of life and death, good versus evil…

JOANNE FLUKE is the New York Times bestselling author of the Hannah Swensen mysteries, which include Double Fudge Brownie Murder, Blackberry Pie Murder, Cinnamon Roll Murder, and the book that started it all, Chocolate Chip Cookie Murder. That first installment in the series premiered as Murder, She Baked:  A Chocolate Chip Cookie Mystery on the Hallmark Movies & Mysteries Channel. Like Hannah Swensen, Joanne Fluke was born and raised in a small town in rural Minnesota, but now lives in Southern California. Please visit her online at www.JoanneFluke.com
or
Not Currently Available for Direct Purchase
Copyright © 2020 American Booksellers Association