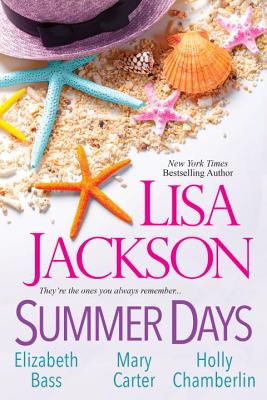 That summer feeling: sun-filled days, warm nights, and the sweet expectation that comes with finding--or rediscovering--love. . .

His Bride To Be, Lisa Jackson

The job perks: a two-week luxury cruise in the company of one of the most eligible bachelors on the West Coast. But posing as Hale Donovan's fiancée to finesse a takeover deal will challenge all of Valerie Pryce's resolve to keep business and pleasure separate. . .

A group yoga tour to Peru is the last place Meredith expects to see her workaholic ex-boyfriend, Sam. Seven years have changed everything--except Meredith's regret at abruptly running away. Yet amid the magnificent views and ancient ruins, a new chance may be waiting. . .

Jacob was the shy, kind twin. Chris was wild and dangerous. As a teenager, Celia Jensen was a little in love with them both. Now Celia is coming back to Hampton Beach for a summer, where she'll untangle the lie that broke her heart.

There's nowhere Ellen would rather nurse her wounds after her ex's betrayal than Ogunquit, Maine--a little beach town where she spent idyllic childhood summers. Then Ellen meets a charming local artist who challenges her to create new memories. . .

ELIZABETH BASS lives with her husband in Montreal, where she writes and astounds the locals with her makeshift French. An elderly cat or dog (or two. . .or four) can typically be found in her apartment, and during the busiest day, Elizabeth usually finds time to sneak in an old movie. She loves to hear from readers and can be found on Facebook, Twitter (@ElizabethBass), or at elizabeth-bass.com.

MARY CARTER is a freelance writer and novelist. Her other works include London From My Windows, Three Months in Florence, The Things I Do for You, The Pub Across the Pond, My Sister's Voice, Sunnyside Blues, She'll Take It, and Accidentally Engaged. Readers are welcome to visit her at marycarterbooks.com

HOLLY CHAMBERLIN was born and raised in New York City. While other kids were playing in the park, she was in the library reading or scribbling stories. In 2003 she and her husband moved to Maine where she is currently working on a new novel. Readers can visit her website at www.hollychamberlin.com.
or
Not Currently Available for Direct Purchase
Copyright © 2020 American Booksellers Association