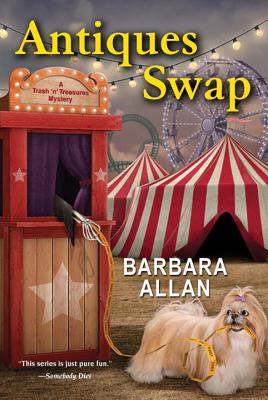 "This series is just pure fun." --Somebody Dies

It happened at Serenity's swap meet, right after Brandy Borne and her ever-more-eccentric mother Vivian finished shooting the pilot for their very own TV show, Antiques Sleuths. Brandy just, well, lost her balance and fell . . . into the helpful arms of an old flame, local tycoon Wesley Sinclair III. But did Brandy's innocent slip lead to the murder of Wesley's wife, Vanessa?

Sure, Vanessa was furious that she caught Brandy in Wesley's embrace. And she did storm off threatening dire consequences for her humbled husband. So when Vanessa turns up very dead, the local tongue-wag is that Wesley may have permanently dethroned the queen of his castle. But Brandy--along with her notoriously nosy mother and their sleuthing shih tzu Sushi--is determined to dig for the whole truth.

Each new clue points in a different direction. What about this suspicious Club of Eight, a super-secret high-society bridge group that supposedly has very liberal rules about "partners"? When a key witness joins the dead list, Brandy and Vivian know they've got to crack this case before the remorseless killer puts an end to their antiquing days--forever!

Barbara Allan is the joint pseudonym of acclaimed short story writer Barbara Collins (Too Many Tomcats) and New York Times bestselling mystery novelist Max Allan Collins (Road to Perdition). Their previous collaborations have included one son, a short story collection, and eleven novels, including the 2008 winner of the Romantic Times Toby Bromberg Award for Most Humorous Mystery, Antiques Flee Market. They live in Iowa in a house filled with trash and treasures. Learn more about them at www.maxallancollins.com and www.barbaraallan.com.
Loading...
or
Not Currently Available for Direct Purchase