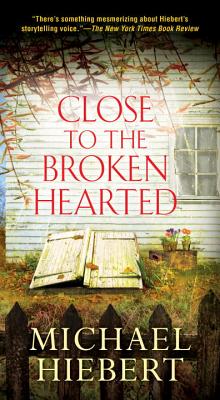 Close To the Broken Hearted (An Alvin, Alabama Novel #2)

In this riveting new novel from Michael Hiebert, a killer's release is the catalyst for shocking revelations in a small Southern town. . .

At twenty-two, Sylvie Carson has known a lifetime's worth of trouble. When she was a child, her baby brother was shot to death by a man named Preacher Eli. Orphaned by her teens, Sylvie is now raising her own baby with no partner in sight. For all these reasons, Leah Teal, Alvin, Alabama's only detective, tries to stay patient when Sylvie calls the station day and night, always with some new false alarm. But now Preacher Eli is out of prison and moving back to town.

As far as the law is concerned, the old man has paid his dues--though Leah's twelve-year-old son, Abe, vehemently disagrees. Between that and his relentless curiosity about the daddy he hardly knew, Abe's imagination is running in all directions lately. While Leah struggles with how much of the past to reveal to Abe, she's also concerned about Sylvie's mounting panic. Something in her gut tells her the girl might be a target after all. For as Leah knows well, there's danger not just in the secrets others keep from us, but in the lies that corrupt from within. It's a hunch that will be tested soon enough, as tensions mount on both sides.

Evoking the South with depth and grace, Michael Hiebert's poignant, gripping novel captures the strength wrought by heartache and lost innocence--and the transformative power of forgiveness, whenever it comes. . .

"Hiebert's first novel courts comparison to the classic To Kill a Mockingbird, but the book manages to soar as a moving achievement in its own right. In Hiebert's hands, psychological insight and restrained lyricism combine to create a coming-of-age tale as devastating as it is indelible." --Publishers Weekly (Starred Review)

"This book captured me from page one. It's honest, it's raw and it's one of the best books I've read in a long, long while." --Lisa Jackson

"Readers who enjoy literary fiction depicting small-town life in the tradition of Harper Lee's To Kill a Mockingbird may want to try Hiebert's debut." --Library Journal

Michael Hiebert is a two-time winner of the prestigious Surrey International Writer's Conference Storyteller's Award and has been published in The Best American Mystery Series, edited by Joyce Carol Oates. His first novel, Dream with Little Angels was published to much critical acclaim. Michael was born and raised and still lives in British Columbia, Canada. Visit him at michaelhiebert.com.

Do you think Preacher Eli meant to pull the trigger on the gun that killed Caleb Carson? Do you agree with the conviction of manslaughter he was given for the crime?

The night Sylvie discovers Preacher Eli is being released from prison, Leah goes to visit her. For the first time, she arrives to find Sylvie acting almost normal. Why does this scare Leah so much?

Abe seems to lack an inherent trust in people, especially strangers. In this book, he immediately sentenced Preacher Eli as guilty in his head as soon as he met the man. In Dream with Little Angels, he does the same thing with Mr. Wyatt Edward Farrow, his new neighbor. How much of this distrust do you think comes from him having spent his life as the son of the only detective in town? How much does Leah’s habit of bringing Abe with her on police matters affect him?

Why is family so important to Abe? And not just his immediate family either. Why is learning about his ancestry such a huge event for him?

Why do you think Sylvie chooses to live in one of the most desolate places in town, where there’s nothing but a narrow road lined tightly with a dark forest? Does this behavior seem to go with or against the way she acts toward the rest of the world?

Why do you think Preacher Eli’s father-in-law was able to purchase the Carson property for such a low price when it was sold at auction? Do you think Eli’s reputation came into play? How much did the fact that three people had died on the property affect the price, do you think?

Do you think Leah was right when she immediately jumped at Preacher Eli being the prime suspect when Sylvie came home and found the five shotgun shells lined up neatly on her table?

Abe’s religious point of view is very much that of a child and yet it seems to be fully functional. Where do you think he acquired such a point of view and, given his upbringing, why do you think it is so important (or maybe better put as unimportant) that his family went to the all-black Full Gospel Church for services?

What do you think was the true cause of Tom Carson’s suicide, or was it a number of different factors? If the latter, what were they?

The wooden swords are a major symbol throughout the book. What do they stand for? What is the significance of Abe breaking his sword when he does? What is happening in his life at this point in time?

Do you think Leah makes the right decision in bringing her children to the crime scene when she finds out Orwin is in the process of breaking down Sylvie’s door? Do you think she tends to put them in needless harm, or is the opposite true and she’s actually overprotective?

Ultimately, Sylvie having the loaded shotgun in her house turns out to possibly save her life. Do you agree that it was a good idea to keep it loaded and ready all that time?

Is taking Abe and Carry to see their new grandparents a good idea, given the health of Grandma Sara? Leah hints early on that when Abe lost his grandpa on her side, it devastated him. Isn’t she just setting things up for that to happen again? Do you think they’ll visit again, or will this be a one-time occurrence?