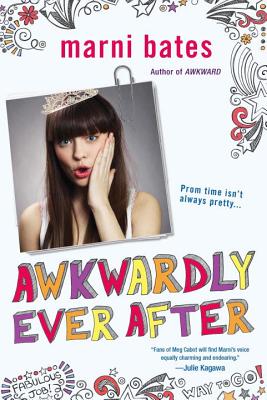 Awkwardly Ever After (Smith High #4)

It's prom season at Smith High School and love is in the air. . .for some people.

Melanie Morris knows she shouldn't keep flirting with her best friend's brother, Dylan Wellesley, even though the last thing she feels is "sisterly" around the cute soon-to-be freshman. But attending prom with somebody else might mean losing him for good. . .

Isobel Peters accepts the fact that she's a huge geek, but she never expected renowned player, Spencer King, would want to get his hands on. . .her reputation. What begins as a bargain could turn into something real--or a Notable disaster!

Corey O'Neal is dating the boy of his dreams, rockstar Timothy Goff. But it isn't easy to trade in anonymity for instant celebrity status, especially now that swarms of protesters want them both banned from prom. Dating Prince Charming in real life is a whole lot harder than it sounds in fairytales.

Marni Bates still can’t believe she falls in love with fictional characters for a living. Her career began during her freshman year at Lewis & Clark College, when she wrote her autobiography, Marni, for HCI’s Louder Than Words series. By the time she graduated, she was on the New York Public Library’s Stuff for the Teen Age 2010 List and had made her fiction debut with her young adult novel, Awkward.

Marni is still adjusting to life in sunny Los Angeles, California. When not writing in front of her air conditioning unit, she can be found rollerblading, bargaining at garage sales, reading romance novels, and watching copious amounts of TV—strictly for artistic inspiration, of course. She loves hearing from readers and hopes that you will visit her at marnibates.com.
Loading...
or
Not Currently Available for Direct Purchase