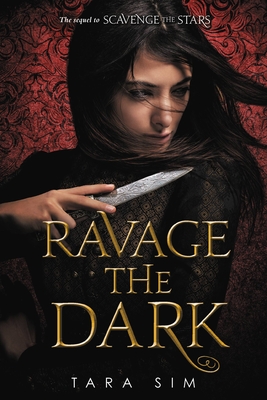 Ravage the Dark (Scavenge the Stars #2)

Step into an opulent world filled with risk, romance, and revenge and find out whether two unlikely heroes can save the world and stop corruption.

For seven long years, while she was imprisoned on a debtor's ship, Amaya Chandra had one plan: to survive. But now, survival is not enough. She has people counting on her; counting on her for protection, for leadership, for vengeance. And after escaping Moray by the skin of her teeth, she's determined to track down the man who betrayed her and her friends.

Cayo Mercado has lost everything: his money, his father, his reputation. Everything except his beloved sister. But he's well on his way to losing her, too, with no way to afford the treatment for her deadly illness. In a foreign empire also being consumed by ash fever, Cayo has no choice but to join Amaya in uncovering the mystery of the counterfeit currency, the fever, and how his father was involved in their creation. But Cayo still hasn't forgiven Amaya for her earlier deception, and their complicated feelings for each other are getting harder and harder to ignore.

Through glittering galas, dazzling trickery, and thrilling heists, Cayo and Amaya will learn that the corruption in Moray goes far deeper than they know, and in the end the only people they can trust are each other.


Praise For Ravage the Dark (Scavenge the Stars #2)…

Praise for Scavenge the Stars:
"This retelling of The Count of Monte Cristo carries all the weight of a classic revenge tale, emulating the original's epic scope and maintaining a plot that tantalizingly paces its reveals....The clashing agendas and alliances make for a sweeping tale of revenge, backstabbery, and old-fashioned unearthing of societal corruption, and readers will eagerly anticipate the sequel in the duology."—BCCB

"A rags-to-riches story with the promise of revenge....Captivating worldbuilding and empathetically etched characters make Scavenge the Stars a light and enjoyable read."—Kirkus

"Sim, author of the Timekeeper series, creates a rough-and-tumble world of wealth, gambling, slavery, and family and power struggles..."—Booklist

"This retelling of The Count of Monte Cristo features a cast that is not assumed white or straight, and a new world waiting to be explored in the sequel....Amaya and Cayo are both interesting characters with real flaws that add depth to the story. Recommended for readers seeking retellings in fantasy settings."—SLJ

Tara Sim is a YA fantasy author who can typically be found wandering the wilds of the Bay Area, California. She is the author of the Timekeeper trilogy, which has been featured on Entertainment Weekly, Bustle, and various media outlets. When she's not chasing cats or lurking in bookstores, she writes books about magic, clocks, and explosives.
Loading...
or
Not Currently Available for Direct Purchase