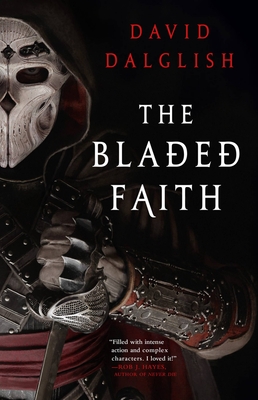 A usurped prince prepares to take up the mantle of a deadly assassin and reclaim his kingdom, his people, and his slain gods in this epic fantasy from a USA Today bestselling author.

Cyrus was only twelve years old when his gods were slain, his country invaded, and his parents—the king and queen—beheaded in front of him. Held prisoner in the invader's court for years, Cyrus is suddenly given a chance to escape and claim his revenge when a mysterious group of revolutionaries comes looking for a figurehead. They need a hero to strike fear into the hearts of the imperial and to inspire and unite the people. They need someone to take up the skull mask and swords and to become the legendary "Vagrant"—an unparalleled hero and assassin of otherworldly skill.

But all is not as it seems. Creating the illusion of a hero is the work of many, and Cyrus will soon discover the true price of his vengeance.

“Filled with intense action, and complex characters who are easy to fall into, The Bladed Faith is what might happen if Final Fantasy crossed with The Way of Shadows! I loved it!”—Rob J. Hayes, author of Never Die

"David Dalglish’s beautiful, grandiose and expansive The Bladed Faith begins at the roots of a rebellion ... this is a rebellion with soul, and one that promises to reach even greater heights as the series continues. Given Dalglish’s track record, don’t be surprised if he somehow manages to top the triumphant standard he sets with The Bladed Faith."—BookPage

"The Bladed Faith is an action-packed start to David Dalglish’s new Vagrant Gods series. Full of sorcery, bloodshed, and a surprisingly charming found family, the story’s twisty final chapters set up an ending that promises much more excitement to come."—Paste Magazine

"The Bladed Faith is gripping, violent and action-packed. It is also about colonialism, PTSD, fighting the good fight & what it truly means to put your life on the line for what’s right. This is David Dalglish at his finest and the Vagrant Gods trilogy promises to be his best story that he’s published so far."—Fantasy Book Critic

David Dalglish currently lives in rural Missouri with his wife Samantha, and daughters Morgan, Katherine, and Alyssa. He graduated from Missouri Southern State University in 2006 with a degree in Mathematics and currently spends his free time dying for the umpteenth time in Dark Souls.
Loading...
or support indie stores by buying on