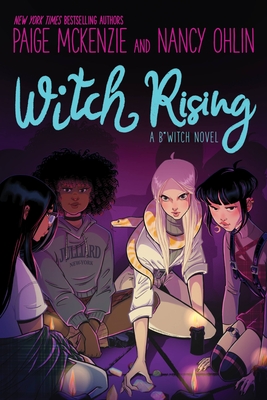 Sorrow Point High's witchiest have returned in this conclusion to the thrilling B*Witch duology—and this time, the danger is even closer to home.

Two rival covens, led by frenemies Greta and Div, are investigating a radical anti-magic faction—the New Order—for the murder of a sister witch. In fact, Div and her coven mate Mira are pretend-dating a couple of New Order members to infiltrate it and bring it down for good. But when the president of the United States aligns himself with the dangerous group and local police ramp up their search for suspected witches, the covens must be more careful than ever.

Even outside of politics, complications abound as Iris and the new witch, Torrence, fight for Greta's affections...and Ridley can't get over her crush on a dead girl...and Binx's own crush turns out to be harboring deadly secrets.

If the covens wish to solve their friend's murder and protect their kind, they'll have to rise above their problems, big and small. But as they grow closer to the truth, one thing becomes certain—trust no witch.

“B*Witch is an inclusive, fun, and suspenseful book that teenage witch fans will enjoy, and many of them might identify with.”

“With faint traces of Harry Potter and whiffs of the television series The Secret Circle and Charmed, this will appeal to teens who love witches in contemporary settings and can’t get enough.”

Paige McKenzie is a millennial hyphenate: a New York Times bestselling author, YouTuber, actor, influencer, creator, artist, and producer. Her first book series, the Haunting of Sunshine Girl, was on the New York Times bestseller list for over a month. Paige is constantly creating. Her Etsy shop, the Homebody Guild, is full of her art and designs, and she is always updating it with new creations. Paige also interacts daily with her Sunshiners across a variety of media including YouTube (where she has over half a million subscribers), Facebook, Twitter, and Instagram. Paige is a founding member of Coat Tale Productions, with three projects in active development. Paige lives in Portland, Oregon, with the love of her life, a seven-pound Chihuahua named Pongo. She invites you to follow her on Twitter @hauntedsunshine.  Nancy Ohlin was born in Tokyo and moved to the United States when she was nine. She has written, ghostwritten, or collaborated on over one hundred fiction and nonfiction books for children, teens, and adults, including her YA novels Consent, Beauty, and Always, Forever (Simon & Schuster). Most recently, she collaborated with Paige on The Sacrifice of Sunshine Girl (Hachette Books), Quvenzhané Wallis on the Shai and Emmie chapter book series (Simon & Schuster), and Chloe Lukasiak on her memoir Girl on Pointe: Chloe’s Guide to Taking on the World (Bloomsbury). She invites you to follow her online at nancyohlin.com and on Twitter (@nancyohlin).
Loading...
or support indie stores by buying on