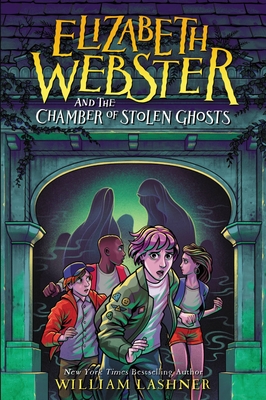 Elizabeth Webster and the Chamber of Stolen Ghosts

In this final installment of the Elizabeth Webster series, Philadelphia's youngest barrister faces a ghostly case that will determine the future of her world.

Reeling from recent struggles in the courtroom, Elizabeth Webster is surprised when two sisters ask her to find the spirits of their parents who have been stolen by a ghost thief. But this simple matter becomes the most terrifying case of Elizabeth's career. Soon, she finds herself battling the ghost thief himself, two cement Martha-Washington-faced dogs, and an army raised by the demon Redwing in the Chamber of Stolen Ghosts.

To find a way forward, Elizabeth will have to rely on an unexpected ally in her quest—her mother. With her mother's history guiding her, Elizabeth will return to the Court of Uncommon Pleas to face her own self-doubts, battle the formidable Redwing, and protect the balance of natural and supernatural realms.

Praise For Elizabeth Webster and the Chamber of Stolen Ghosts…

"At this point, Elizabeth’s fans know what they’re getting—a delicate mix of legal sparring and paranormal trappings propping up a well-charted mystery. This final entry holds its own against its predecessors...fans will be pleased with how Elizabeth turns out in this series that remains charmingly original in the field of middle-grade paranormal mysteries."
—Kirkus

"An adventure filled with intrigue, frights, and delightfully witty banter.

This is a must-purchase for any library that already has the series; it is a wonderful third installment."—William Lashner, SLJ

William Lashner is a former criminal prosecutor with the Department of Justice in Washington, D.C. and a graduate of the Iowa Writers' Workshop. His novels have been published worldwide and have been nominated for two Shamus Awards, a Gumshoe Award, an Edgar Award, and been selected as an Editor's Choice in the New York Times Book Review. When he was a kid, his favorite books were The Count of Monte Cristo and any comic with Batman on the cover. Elizabeth Webster is his first series for kids.
Loading...
or support indie stores by buying on