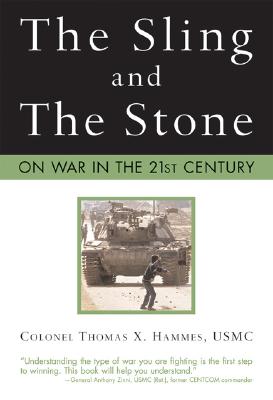 The Sling and the Stone (Hardcover)

On War in the 21st Century (Zenith Military Classics)

Ongoing events in Iraq show how difficult it is for the world's only remaining superpower to impose its will upon other peoples. From Vietnam, French and US, to Afghanistan, Russian and US, to Israel and the Palestinians, to Somalia and Kosovo, recent history is replete with powerful military forces being tied up by seemingly weaker opponents. This is Fourth Generation War (4GW), and Colonel Thomas Hammes, United States Marine Corps, tells you all about it. The author explains asymetrical warfare (4GW) as the means by which Davids can defeat Goliaths.Answers to the "hows" of this along with recommendations for prescriptive actions are found in Thomas Hammes insightful book on the strengths and weaknesses of coventional military power. Hammes, a full colonel on active duty in the Marine Corps is an expert at asymetrical warfare, perhaps better known as fourth generation warfare (4GW). This is the means by which Davids can defeat Goliaths.Colonel Hammes is well placed to write this study. As a career-Marine he has trained 4GW warriors in some places and fought against them in others. He has also made a lifelong study of military history which helps him illuminate the previous three generations of armed conflict and define and detail the newest, fourth generation of war.- An insider's look at the military dilemma now facing U.S. forces worldwide- Gives historical examples to support the ideas behind the transformation of warfare in the 21st century- A handbook to understanding asymetrical warfare"Colonel Hammes cuts to the quick in defining the conundrum of dealing with twenty-first century warfare, the competing concepts of its nature and its management. His is a controversial analysis which is bound to raise the hackles of today's techno warriors ."-Bernard Trainor, Lieutenant General, USMC (Ret.), NBC News military analyst, co-author of The Generals"Based in history and current events, Tom Hammes explains the nasty, long-term, broad-spectrum wars we have fought

A graduate of the U.S. Naval Academy and a career Marine, Thomas Hammes has spent most of his twenty-eight years serving in infantry and intelligence assignments. Colonel Hammes is considered by many in the defense community as the foremost expert in insurgent warfare. He has written numerous articles on defense issues and has appeared on PBS News Hour and other cable and network broadcasts. He is a senior military fellow at the National Defense University. He lives with his family in northern Virginia.
or
Not Currently Available for Direct Purchase
Copyright © 2020 American Booksellers Association