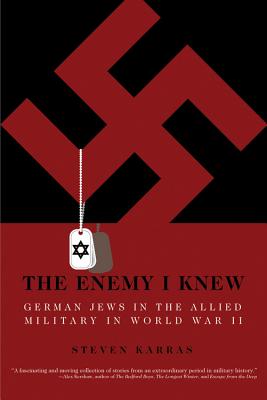 The Enemy I Knew

German Jews in the Allied Military in World War II

Even Elie Wiesel, the Nobel Prize winning survivor of Auschwitz and Buchenwald, struggles with the question:  Why didn’t the Jews fight back?  And finally, in view of the circumstances--even now, who would believe what was happening?--he concludes that the question is “not why all the Jews did NOT fight, but how do many of them DID.  Tormented, beaten, starved, where did they find the strength--spiritual and physical--to resist?”  In fact, over

10,000 German Jews—34 percent of the refugee population between the ages of eighteen and forty—fought in the allied armies of World War II.

This book honors those European-born Jewish combat veterans of World War II--refugees from the Nazi regime in Germany and Austria who faced their persecutors by joining the Allied Forces in a fight against the country of their birth.  These twenty-seven interviews take readers into the unique and harrowing experience of German and Austrian Jews who served as Allied soldiers in North Africa and Europe--brave men and one woman whose service restored a sense of dignity and allowed them to rise above their former victimization at the hands of Nazi oppressors.  All burned with anger at the Germans who had subjected them, often as young children, to cruelty in everyday life in their hometowns, and to ridicule in the national media.  As soldiers who knew the language and psychology of the enemy better than any of their comrades, they struck back with new-found pride against the rampant injustice that had annihilated their families, destroyed their prospects, and subjected many of them to the worst forms of physical abuse, both random and terrifying. In The Enemy I Knew they tell their stories, and the world is richer for their heroic acts, and for their testimony.


Praise For The Enemy I Knew: German Jews in the Allied Military in World War II…

Accent on Tampa Bay Magazine
“This book is a tribute to the overlooked men and women who risked everything to help rid the world of evil.”

Intermountain Jewish News
“In prose, the first-person accounts are riveting and illuminating, shining a light on a little-known dimension of the vast and complex story of World War II. The veterans who bear witness to their wartime experience are sometimes direct and blunt in their descriptions, often eloquent and philosophical and always fascinating…If you’re looking for powerful expressions of heartfelt patriotism—the kind that only personal experience can create—look no further than The Enemy I Knew. There is drama aplenty…After reading The Enemy I Knew, one is forced to conclude that the legendary Greatest Generation was even greater than we realized.”

The Jewish Review (Portland, OR)
“For all those who have not heard this story at their father’s or grandfather’s knee, and for anyone who has considered the question, ‘Why didn’t the Jews fight back?’ this book is essential.”

North County Times
“A sort of real-life version of the film ‘Inglourious Basterds’ without the baseball bats, the oral history The Enemy I Knew lets more than two dozen Jewish refugees from Germany and Austria who served in the U.S. and British militaries in Europe during World War II tell their stories. The larger themes may be familiar, but the story of Jews who fought back against their oppressors -- who returned home in the conquering army -- is uplifting in the face of the horror of the Holocaust...The stereotype of the weak Jew, going meekly to his fate in the death camps, is put to rest here. Those Jews who had the ability to fight back surely did -- often in the uniform of the United States or Great Britain. (3 out of 4 stars).”

The Jewish Tribune
"Steven Karras has avoided what could have been a dry academic analysis of the motives of German Jews for fighting in Allied armies against the Nazis. Rather, he has produced a collection of twenty-seven personal interviews in which people recall their emotions more than fifty years after World War II…The tales of battle are mind-boggling, as young men risked life and limb for an ideal….the narratives are fascinating."

The Daily News
"Heroic, poignant and heartbreaking, it is a compelling book. Some of the memoirs, especially those concerning escape from Germany, provide graphic pictures of the desperation that the Jewish community felt in the late 1930s, especially after Crystal Night, when the Nazis were closing and there were very few places to flee."

America in WWII
"...the unique background of these 27 veterans give The Enemy I Knew value for students of Jewish experiences before and during the war, as well as devotees of war stories."

Publishers Weekly
“Few stories can rival the ones told in The Enemy I Knew.” Library Journal (Starred Review)
"This is a collection of 27 first-person combat accounts, sought out by the author, from German and Austrian Jews who served in the Allied Armed Forces in North Africa and Europe. These men (and one woman) had emigrated as children or young adults to the United States or Great Britain between 1937 and 1941. All of them jumped at the chance to fight the Nazis, and all served in combat (the woman was an ambulance driver). One man served in both the European and the Pacific theaters and returned to Germany in 1946 for occupation duty. These accounts, all newly published, are filled with terror and a simple courage, with a feeling of a duty fulfilled. Recommended."

Military Heritage
"Imagine fleeing Nazi Germany because of one’s Jewish faith and then returning during the war as a member of the Allied forces. Author Steven Karras began interviewing Jewish refugees in 1999 who had fled Nazi persecution because of their religion and come to the United States and Great Britain, only to find themselves being inducted into the military and returning to their homeland. Following the oral-history format, Karras selected 27 individuals to interview for his book. One became a U.S. commando and actually liberated his own parents from a Nazi concentration camp. Another soldier was assigned to military intelligence and later questioned a former classmate who was serving in the German Army. Each vignette describes the individual’s early life in German or Austria and his subsequent military service."