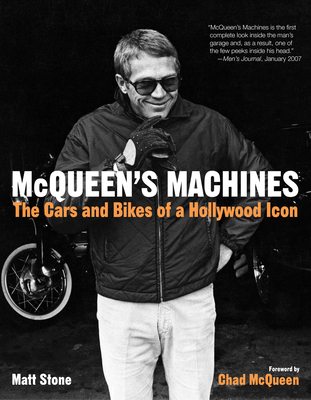 The Cars and Bikes of a Hollywood Icon

No other Hollywood star has been so closely linked with cars and bikes, from the 1968 Ford Mustang GT Fastback he drove in Bullitt (in the greatest car chase of all time) to the Triumph motorcycle of The Great Escape. McQueen’s Machines gives readers a close-up look at the cars and motorcycles McQueen drove in movies, those he owned, and others he raced. With a foreword by Steve’s son, Chad McQueen, and a wealth of details about of the star’s racing career, stunt work, and car and motorcycle collecting, McQueen’s Machines draws a fascinating picture of one outsized man’s driving passion. Now in paperback.


Praise For McQueen's Machines: The Cars and Bikes of a Hollywood Icon…

"Few actors are as linked to the cars they drove as Steve McQueen, and now you can learn more about this icon's passion for motoring in McQueen's Machines: The Cars and Bikes of a Hollywood Icon. Opening with a foreword written by Steve's son Chad, the book covers both the cars he drove on screen - including the 1968 Ford Mustang GT 390 fastback from Bullitt - and the cars he owned and raced off of it, like his 1958 Porsche Speedster and a a 1965 Ferrari 275 NART Spyder. A great coffee table book for gearheads and McQueen fans alike." - Uncrate.com

"A great gift for car and motorcycle buffs."- Milwaukee Journal Sentinel "This is a great book for fans of the actor or his vehicles, and it's the most interesting car book issued this year." - The Virginian Pilot "Car and motorcycle enthusiasts will love this book, but so will people (namely baby boomers) who were fans of Steve McQueen. While the book looks at a specific part of the late actor's life - his rides and passion for racing - it also reveals much about the man." -Omaha World-Herald "This book is a fantastic gift to give fans of McQueen as it carefully chronicles his career and the details of his iconic autos and motorbikes. A must-see!" - MonstersAndCritics.com

Matt Stone (Glendale, CA), former executive editor of Motor Trend magazine, has been a professional automotive journalist and photographer since 1985. He is the author and photographer of several books, including Motorbooks' best-selling 365 Cars You Must Drive (2006), My First Car (2011), McQueen's Machines (2010), McQueen's Motorcycles (2017) and Hot Rod Empire (2018). He is the co-author, with Preston Lerner, of Winning: The Racing Life of Paul Newman (2014) and History's Greatest Automotive Mysteries, Myths, and Rumors Revealed (2014).

Matt Stone, executive editor of Motor Trend magazine, has been a professional automotive journalist and photographer since 1985. His voice is often heard on the syndicated Motor Trend Radio Network, and he serves as the magazine's history, design, and motorsport expert. Stone has a Bachelor's degree from Cal Poly Pomona, with a major in business and minors in journalism and marketing. He enjoys anything with four wheels, though demonstrates a particular passion for sports, performance, and racing cars of the 1950s, 1960s, and 1970s. Stone is a Chief Class Judge at the Pebble Beach Concours d'Elegance and is a member of SPEED TV's Barrett-Jackson Collector Car Auction broadcast team. He serves his profession as an officer, board member, committee chairman, and past-president of the Motor Press Guild (MPG) trade association. Matt has authored and photographed several automotive books for Motorbooks, including the best-selling 365 Cars You Must Drive. A California native, Stone resides in Glendale.