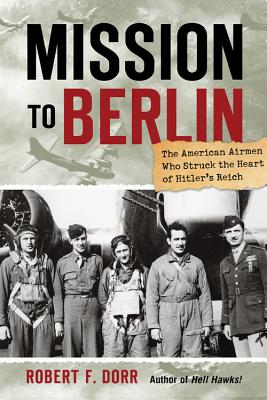 The American Airmen Who Struck the Heart of Hitler's Reich

From Hell Hawks! author Bob Dorr, Mission to Berlin takes the reader on a World War II strategic bombing mission from an airfield in East Anglia, England, to Berlin and back. Told largely in the veterans’ own words, Mission to Berlin covers all aspects of a long-range bombing mission including pilots and other aircrew, groundcrew, and escort fighters that accompanied the heavy bombers on their perilous mission.

Praise For Mission to Berlin: The American Airmen Who Struck the Heart of Hitler's Reich…

PUBLISHERS WEEKLY
"Having authored a multitude of books and articles on the Air Force and Air warfare, Dorr should be the best person to illuminate the plight of the men who flew over Berlin on February 3, 1945. During the Berlin mission the Eighth Air Force launched 2,385 combat aircrafts from East Anglia targeting "every subway station and every telephone pole in the city." Ostensibly, this is the story of four of the men who flew in those planes, specifically the "Flying Fortress" B-17, one of the most popular bombers of the European theatre. Those four men and their planes appear and reappear infrequently in the narrative. The book flits back and forth between their tales and those of a few hundred others while also intermingling stories of other flyers and other bombing runs. Pilots and dedicated fans of WWII aircraft will best appreciate this book and its details of the engines, guns, construction, and durability of the fighters and bombers that leveled Germany. At its core, this is a book about planes, not about men.

AIR FORCE TIMES
"Told largely in the vivid words of the veterans themselves, the story puts you in the freezing-cold cockpit for a white-knuckle mission over heavily fortified enemy territory.

BOWLING GREEN DAILY NEWS
“Mission to Berlin” provides not only a detailed description of an Allied bombing campaign during World War II, but also an up-close and personal look at the individuals involved. Each part of the mission is described in a way that makes the reader feel that he or she is actually there, seeing what was going on as it happened. It makes readers appreciate the courage and skill of those who fought in the deadly skies over the 3rd Reich. "

TUCSON CITIZEN
"This is an excellent account of the Berlin campaign...Dorr takes readers on a World War II strategic bombing mission from the airfields of England to Berlin and back. This is “you are there” reporting which covers all the players including pilots and other aircrew, ground crew, and escort fighters that accompanied the heavy bombers on their dangerous missions. "

MILITARY HISTORY
"In this fascinating volume, noted aviation historian Dorr uses official records, personal memoirs and first-person interviews to bring to vivid life the American airmen who braved flak, fighters, altitude and the elements to pound Adolf Hitler's capital into rubble and hasten the end of the Third Reich."

DEFENSE MEDIA NETWORK
"Dorr’s fascinating tale will be read at different levels, depending upon the knowledge of the reader. For some one just beginning to have an interest in World War II bombing operations, the author’s overall picture of the powerful event will lure the reader into reading more, and the author provides an excellent bibliography for that purpose. The knowledgeable reader will savor Mission to Berlin for its intimate detail and the rarely seen level of information about aerial warfare in both large and small scale. And for the expert, the person every author dreads, sitting there reading, waiting to pounce on each and every error, Dorr will offer a genuine challenge – he makes no mistakes."

ROBERT F. DORR an air force veteran and a retired senior Foreign Service officer. He is the author of 70 books and thousands of magazine articles about the air force, aviation, and military affairs. He writes a weekly opinion column for Air Force Times, monthly columns for Combat Aircraft, Air International, and Aerospace America magazines, and a quarterly column for Air Power History, which he helped create. He is the author of Mission to Berlin, Mission to Tokyo, Hell Hawks!, Fighting Hitler's Jets, and Air Force One (all with Zenith Press).