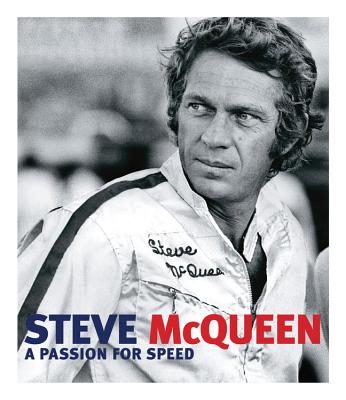 A Passion for Speed

Even 30 years after his death, Steve McQueen remains an icon of cool. His image continues to appear in advertising and pop culture, and car, motorcycle, and racing fans embrace him as one of their own. Now comes this volume featuring rare photography and chronicling McQueen's fascination with and passion for all things internal-combustion powered.

McQueen's movie characters always had a great motorcycle or car--from the 650cc "BMW" motorcycle (a disguised Triumph) in The Great Escape (1963) to the Gulf Porsche 917 race car he raced in Le Mans (1971). His need for speed propelled him from Hollywood into a number of top off-road motorcycle races, including the Baja 1000, Mint 400, and Elsinore Grand Prix. Determined to be ahead of the pack, McQueen trained vigorously, weight lifting, running, and studying martial arts. Steve McQueen A Passion for Speed reflects a life lived in the moment and with the pedal to the metal.

Praise For Steve McQueen: A Passion for Speed…

"The darling of mens lifestyle bloggers everywhere, Steve McQueen has long epitomized rugged cool. This book is a paean to the legend. It offers iconic photographs of McQueen with his cars and motorcycles but also rare shots of him riding horses, working out and relaxing with his wife. Worth buying for the photos alone." - Forbes.com

"There are books about famous movie stars and books about famous auto racers, but rarely do the two disciplines converge. Paul Newman is one example while Hollywood legend Steve McQueen is another. Some of McQueen's better-known roles included the Mustang-driving detective in "Bullitt" and the motorcycle-jumping POW in "The Great Escape". But it was his 1971 portrayal as Porsche-pilot Michael Delaney in Le Mans where McQueen displayed his fanaticism for auto racing. Frederic Brun's book Steve McQueen: A Passion for Speed is full of behind the scenes photos of the actor / racer's obsession in front of the camera as well as participating in various racing events. www.motorbooks.com" - Newsday

Political attache in the French Parliament, FREDERIC BRUN is above all a movie lover, and a true James Bond fan. A sought-after commentator, he contributes to a number of magazines and is the author of STEVE McQUEEN & SPEED and FRANK SINATRA: A LIFE IN PICTURES.
Loading...
or
Not Currently Available for Direct Purchase