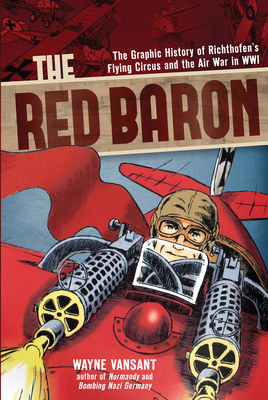 In The Red Baron, graphic artist and author Wayne Vansant illustrates the incredible story of Manfred von Richthofen, whose unparalleled piloting prowess as a member of the Imperial German Army Air Service made him a World War I celebrity, both in the air and on the ground. In his signature style, enjoyed by readers of Normandy and Bombing Nazi Germany, Vansant beautifully depicts the fearsome intelligence and mid-flight awareness that would earn Richthofen eighty documented air combat victories over the Western Front in the halcyon days of military aviation. From his beginnings as cavalry member and a pilot-in-training to the years he spent commanding Jasta 11 from the cockpit of his fabled red plane, to his eventual leadership of the ultra-mobile Jagdgeschwader 1 (aptly nicknamed "Richtofen's Flying Circus" by nervous foes because of the group's colorful airplanes and mobile airfields), The Red Baron brings the story of this legendary figure to life. Richthofen died young under controversial circumstances, but the Red Baron's astonishing skill and tactical acumen lived on far long after his death and helped usher in a new type of warfare that would reign supreme twenty-five years later: war in the air.

"Wayne Vansant profiles and brings back to life one of combat aviation's greatest legends, Manfred von Richthofen€”better known as the Red Baron€”in a graphic history that will surely entertain both young and old alike. This illustrated biography also highlights the exploits of many other combat pilots, German and Allied, and is as educational and entertaining for students as for adults. . . . The fighter pilots of the First World War set the benchmark for later generations of pilots. Twenty years later, in an even greater world war, their legacy of conduct, chivalry, honor, innovation, and success would be remembered, even revered, by another generation of young men who would once again fly, fight, and die in hostile European skies. Other heroes would emerge, but the Red Baron will always stand alone." - Colin D. Heaton, historian and author of The German Aces Speak and The Me 262 Stormbird

"The Red Baron by Wayne Vansant is more than a gripping graphic biography of Baron Manfred von Richthofen, the greatest ace of World War I. Vansant has not only done a remarkable job in telling the story of the Red Baron, he has presented an insightful account of the development of combat aviation, and his depictions of aerial actions are absolutely thrilling. But as important visually as they are, his real achievement is in going beyond the exciting dogfights. He rounds out the story with remarkable diligence, revealing the men behind the pilots and the importance of the aircraft that they flew. The Red Baron is an exceptional addition to the historiography of World War I and combat aviation. Bravo!" - Dwight Jon Zimmerman, award-winning and New York Times best-selling military history author

"The Red Baron takes you into the cockpit of Manfred von Richthofen's blood-red Fokker and hurls you into aerial duels in a way made possible only in a graphic history. This legendary story of men who flew with the wind in their wires will stay with you long after you savor Wayne Vansant's words and illustrations." - Robert F. Dorr, USAF (ret.), historian and author of Fighting Hitler's Jets