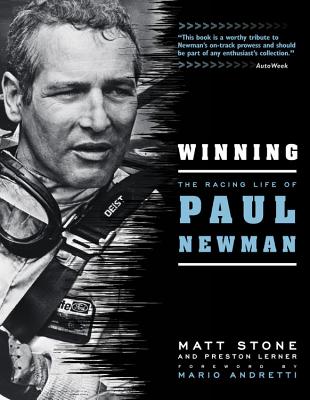 The Racing Life of Paul Newman

Winning: The Racing Life of Paul Newman is also the title of the 2015 documentary about Paul Newman from director Adam Carolla. Read the book that inspired the film!

Though he is famous as one of Hollywood's greatest actors, a world-class humanitarian, and the founder of the Newman's Own natural food empire, the late Paul Newman had another intriguing and lesser-known passion: he was an avid, successful, and well-respected car racer and team owner. In Winning: The Racing Life of Paul Newman, Matt Stone of Motor Trend teams up with Preston Lerner of Automobile magazine to bring you the incredible racing biography of a man whose serious racing days began at an age when many race car drivers contemplate retirement. It is the story of someone who entered the 24 Hours of Daytona at the age of 70 and made his last professional race outing at 82; whose roster of Newman Haas drivers reads like a who's-who of open-wheel racing; and whose interest in cars extended from the likely suspects to old trucks and new hybrids. Newman is also the charming pal who, when a miserably wrecked Ferrari was dropped at his door by the incorrigible prankster Robert Redford, returned the favor by having the car, crushed into a cube, delivered to Redford's living room. The anecdotes, the races, the carsâ?¬â?Winning contains them all, adding up to an award-winning and unprecedented look at Paul Newman's racing talent, unwavering conviction, endearing charm, and enduring spirit.

Matt Stone (Glendale, CA), former executive editor of Motor Trend magazine, has been a professional automotive journalist and photographer since 1985. He is the author and photographer of several books, including Motorbooks' best-selling 365 Cars You Must Drive (2006), My First Car (2011), McQueen's Machines (2010), and McQueen's Motorcycles (2017). He is the co-author, with Preston Lerner, of Winning: The Racing Life of Paul Newman (2014) and History's Greatest Automotive Mysteries, Myths, and Rumors Revealed (2014).

Mario Andretti is auto racing's definition of "Been There, Won That." His professional driving career spanned more than four decades and includes pit-stops as a Formula One driver (1978), an Indy 500 winner (1969), the Daytona 500 (1967), and four CART/USAC open-wheel racing national championships. Andretti has been called Mr. Versatile, known for driving everything from USAC sprint cars on the dirt to IndyCars, sports racing prototypes, and of course F1. He was Newman Haas Racing's first driver when the team was formed in 1982, raced there for 12 seasons, and is considered one of Paul Newman's closest friends.