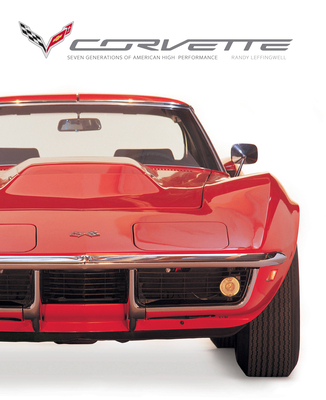 Officially licensed and created in cooperation with General Motors, Corvette: Seven Generations of American High Performance focuses on the Corvette's place in popular culture as well the its engineering and design success. This book offers something for everyone who has ever lusted after a 'Vette. From the inaugural 1953 Corvette to today's stunning Stingray, this book touches on all aspects of Chevrolet's iconic sports car: history, racing, period ads, posters, memorabilia, key designers such as Bill Mitchell, engineers such as the fabled Zora Arkus-Duntov, celebrity 'Vette fans, and more. No Corvette fan will want to miss out on this ultimate history of America's first and foremost sports car.

"Mr. Leffingwell’s encyclopedic knowledge of the topic, and of the players, helps immensely here, in separating the seminal from the trivial and in conveying the information concisely.... a worthwhile addition." - The New York Times
—-

'well written and interesting, as well as nice to look at'

"This book details well this saga in a lavish presentation, along with an equally well-researched text with all the details that an enthusiast could wish for." - Victory Lane

"Place Corvette Sixty Years on your coffee table and it’s bound to be a favorite page turner, but better yet prop it in your lap and turn the pages slowly and learn everything you’ve never known about the legendary two-seater." - Iveho.com
—-

Randy Leffingwell wrote his first book, American Muscle, in 1989 while still on staff at the Los Angeles Times. Since then, he has authored another 47 titles for Motorbooks and its sister publisher Voyageur Press covering subjects from sports cars to motorcycles to farm tractors. Leffingwell is considered one of the top Corvette historians working today, and he enjoys a close working relationship with Chevrolet as well numerous other manufacturers. His  previous Corvette titles include Art of the Corvette; Corvette Fifty Years, Corvette 60 Years, and Legendary Corvette. He lives in Santa Barbara, California.