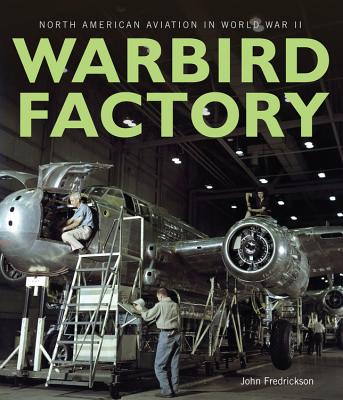 Explore the WWII history of the company that later became a part of Boeing and made more aircraft from 1938 to 1944 than any other company in the United States.

During World War II, Los Angeles was the ultimate boom town. By the end of the war, the L.A. area had produced 17 percent of all of America's war needs. North American Aviation, Inc. (NAA), operating out of their main Inglewood, California, plant, which is south of and adjacent to the city, was a key player in that work.

From 1938 to 1944, NAA built over 40,000 aircraft, more than any other company in the United States. The bulk of them were of three iconic types designed by NAA:

- The P-51 Mustang, arguably the best fighter of WWII.

- Two-seat military pilot trainers, such as the AT-6 Texan.

This is a fascinating story of a remarkable time in aviation history, when American businesses helped fund the arsenal of democracy that helped defeat the Axis powers. Warbird Factory tells this story with over 200 photographs, many of which come directly from the NAA/Boeing archives, where they have resided since WWII. This is an essential book for anyone interested in warbirds, aviation, Boeing/NAA, WWII, and/or the history of Southern California!

John M. Fredrickson retired as a senior manager of the Boeing Company in 2011 after thirty-six years of service. He has twenty-one years combined reserve and active-duty service with the US Air Force and is a Vietnam War veteran. He is the author of Kansas City B-25 Factory of the Images of Aviation series (Arcadia Publishing 2014).

"Warbird Factory is a perfect exposition of how the American public and the U.S. aviation industry shook off the effects of deadening depression and sprang into action with the onset of WWII."

"This book offers aviation, company, wartime and broader American history served up in an accessible and really quite beautiful package. It is good to read and stunning to look at. At first glance, this one had ‘book of the year' written all over it. I didn't rush in to a review; I kept it back for slower appreciation. This may not suit the PR departments of publishers but I know the people at Zenith Press are really going for it to produce books of this standard. They are winning. The NAA archive was a gift from heaven and they didn't pass it up. Nor should you. John Frederickson and his publisher have presented us with a masterpiece. More please."

"The story of NAA's great factories is laid out in this new photobook. Hundreds of images tell the story, many of them from the company's archives. The accompanying text completes the tale, covering the events, personalities, and actions which carried NAA forward into the annals of history."

"Fredrickson's work has produced a book which can be enjoyed by aviation buffs as well as professional historians and is as welcome on a coffee table as it is in a professional library."

"Fredrickson's work has produced a book which can be enjoyed by aviation buffs as well as professional historians and is as welcome on a coffee table as it is in a professional library." - Seattle Post-Intelligencer blog TRAVEL FOR AIRCRAFT