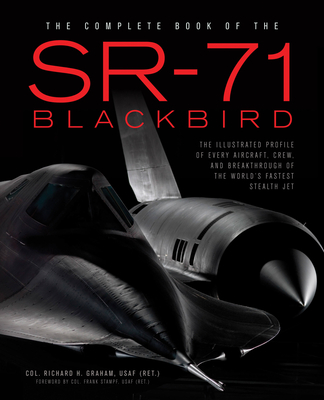 The Complete Book of the SR-71 Blackbird

The Illustrated Profile of Every Aircraft, Crew, and Breakthrough of the World's Fastest Stealth Jet

The ultimate SR-71 book which profiles the history, development, manufacture, modification, and active service of all 50 models in the SR-71 program.

At the height of the Cold War in 1964, President Johnson announced a new aircraft dedicated to strategic reconnaissance. The Lockheed SR-71 Blackbird spy plane flew more than three-and-a-half times the speed of sound--so fast that no other aircraft could catch it. Above 80,000 feet, its pilots had to wear full-pressure flight suits similar to what was used aboard the space shuttle.

Developed by the renowned Lockheed Skunk Works, the SR-71 was an awesome aircraft in every respect. It was withdrawn from use in 1998, when it was superseded by satellite technology. Twelve of the thirty-two aircraft were destroyed in accidents, but none were ever lost to enemy action.

Throughout its thirty-four-year career, the SR-71 was the world's fastest and highest-flying operational manned aircraft. It set world records for altitude and speed: an absolute altitude record of 85,069 feet and an absolute speed record of 2,193.2 miles per hour.

The Complete Book of the SR-71 Blackbird covers every aspect of the SR-71's development, manufacture, modification, and active service from the insider's perspective of one of its pilots and is lavishly illustrated with more than 400 photos. Former pilot and author Richard Graham also examines each of the fifty planes that came out the SR-71 program (fifteen A-12s; three YF-12s; and thirty-two SR-71s) and tells each plane's history, its unique specifications, and where each currently resides.


Praise For The Complete Book of the SR-71 Blackbird: The Illustrated Profile of Every Aircraft, Crew, and Breakthrough of the World's Fastest Stealth Jet…

"The Complete Book of the SR-71 Blackbird is impressive with its illustrations and imagery beginning with the cover and end pages--it fits into the coffee table size category though it is far from unwieldy. Thankfully, many illustrations are larger than previously published for better understanding. Graham's writing and intimacy with the SR-71 complement the images, many unseen in previous publications (a favorite is small icicles dangling from the chines of a Blackbird), wit h his experience and authorship." - Travel for Aircraft

"The Complete Book of the SR-71 Blackbird will become THE reference book on this fantastic aircraft." - Airsoc.com

"This spectacular book is an absolute 'must have' for all fans of the SR-71 Blackbird or, indeed, the world of supersonic flight. A veteran pilot on the type, the author has put an immense amount of care into this book but at no time does he shift the emphasis on to himself. The book is a celebration of American know-how and the can-do spirit of the US military and I will have to drop my guard here and say that the thing is awesome from cover to cover." - WarHistoryOnline.com