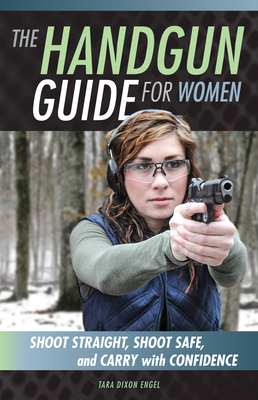 The Handgun Guide for Women (Paperback)

The perfect book for any woman who is interested in purchasing, selecting, and owning a gun, from her first to her five-hundredth firearm.

The Handgun Guide for Women gives a public voice to the legions of female gun enthusiasts in the United States. It is a common sense, step-by-step guide to making the decision to purchase a gun, selecting the correct gun, securely keeping a gun in the home, and maintaining the proficiency necessary to be a safe gun owner 100 percent of the time.

The book also defies the theory among the popular media that women are, by their maternal nature, anti-gun. Author Tara Dixon Engel, an NRA-certified instructor in handguns, rifles, shotguns, personal defense, and home defense, writes that women should be gun advocates. A firearm is often the one thing that stands between your family and a predator.

The Handgun Guide for Women reflects a passionate belief in the Second Amendment. It is a straightforward and meticulously clear representation of the responsibilities involved in gun ownership and is the perfect book for anyone who is considering owning a gun or who has been a proud gun owner for many years.

Tara Dixon Engel is an NRA-certified instructor in handguns, rifles, shotguns, personal defense, and home defense. She regularly teaches classes to beginners and those seeking an Ohio Concealed Handgun License (CHL). She is the author of three previous books, including Naked In Da Nang (Zenith Press, 2004).


Praise For The Handgun Guide for Women: Shoot Straight, Shoot Safe, and Carry with Confidence…

"If you're looking for a book that covers each and every aspect a new shooter needs to know, look no further. The Handgun Guide for Women covers far more than the basics and is a great addition to any bookshelf." - Shooting Illustrated (NRA)

"It's a scary world out there," said Tara Dixon Engel, an NRA-certified gun instructor and author of The Handgun Guide for Women. "Between the nutcases and terrorists and the standard, run-of-the-mill criminals, a lone female is an easy target." - CNNMoney.com

"This is a book I would recommend to anyone, regardless of gender if they're new to shooting and are interested in learning about handguns. Other books geared towards beginners seem sto assume there is a certain level of knowledge about guns and shooting ranges. Engle makes no such assumptions. She covers the basics to thoroughly, that after reading it, any beginner will feel comfortable moving through the often0time intimidating, scary gun world with ease." - GUNS Magazine

"It is well worth the time for any new handgun owner to read this book perhaps even before purchasing a handgun. "The Handgun Guide for Women" will provide key information on getting the right start shooting. That, combined with quality NRA Basic Pistol or concealed carry classes from a qualified instructor, is sure to give any lady more confidence in carrying and using her handgun." - Buckeye Firearms Association