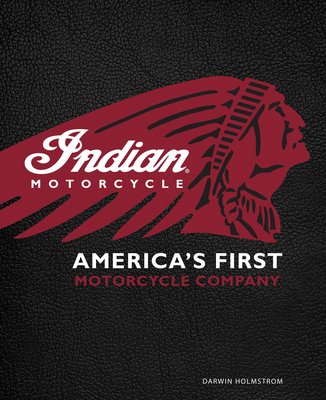 Indian Motorcycle(R): America's First Motorcycle Company(tm) tells the complete story of Indian, America's first mass-produced motorcycle maker, from its start as a bicycle manufacturer to the purchase of the brand by Polaris Industries in 2011 and the subsequent new Indian motorcycles. In the early years of the 20th century, Indian dominated the world's racetracks, earning the brand a worldwide reputation for quality, performance, reliability, and technical innovation, but the once-mighty company fell on hard times and in 1953 was forced to file bankruptcy.

The Indian brand never quite died, though, thanks in large part to fanatically devoted enthusiasts, who tried to resurrect it for over half a century. Finally Polaris, maker of the highly regarded Victory(R) brand of motorcycles, purchased the brand and released the Chief(R) and Scout(R), models that once again restored Indian to its rightful place in the motorcycle pantheon.

"Every old and new Indian owner should have this masterful book." - Dr. Gregory Frazier

"If you’re into Indians, and I know a lot of Throttle Jockey readers are if my emails are any indication, you owe it to yourself to add a copy of this fine book to your collection." - TheManual.com

"Indian Motorcycle, America's First Motorcycle Company reaches back to the turn of the last century to tell the story of Indian's foundation as a bicycle company, its move into motorcycles and its turbulent ups and downs over the years." - Maxim

"anyone passionate about the marque will be glued to the pages for hours." - Rider Magazine

"Indian Motorcycle offers a fascinating glimpse into the world of motorcycles and the people who dedicate their lives to designing them, building them, and riding them. Obviously, if you aren't already interested in Indian and its history, this book isn't for you. But for those of us carrying a little fanboyism for the brand, it's an interesting read and I recommend it. Reader beware, however: you will end up desperately wanting an Indian in your garage."