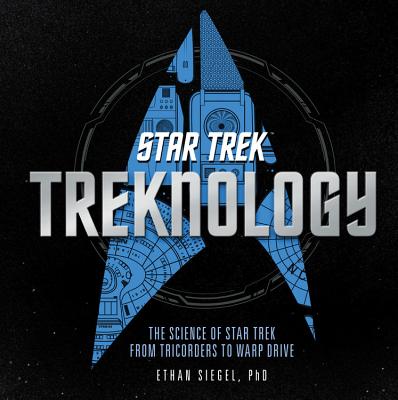 The Science of Star Trek from Tricorders to Warp Drive

Be amazed by 25 iconic pieces of tech from the Star Trek canon and the science behind how they function with Treknology. You will not believe how close we are to achieving some of them today.

The name Star Trek conjures images of faster-than-light spacecraft, holographic crew members, and phasers set to stun. Some of these incredible devices may still be far from our reach, but others have made the leap from science fiction to science fact—and now you can learn the science and engineering of what makes them tick.

Treknology looks at over twenty-five iconic inventions from the complete history of the Star Trek television and film universe. Author Ethan Siegel explores and profiles these dazzling technologies and their role Star Trek, the science behind how they work, and how close we are to achieving them in the real world today.

This stunning collection is packed with 150 superbfilm and television stills, prop photography, and scientific diagrams to pull you into another world. Brace yourself for a detailed look at the inner workings of Star Trek’s computing capabilities, communications equipment, medical devices, and awe-inspiring ships. Treknology is one that no fan of Star Trek, or future tech, will want to miss.

Praise For Treknology: The Science of Star Trek from Tricorders to Warp Drive…

Treknology is a gorgeous, well-researched and sharply written exploration of where we actually stand on technology to take us where no man has gone before: from transporters, impulse engines and warp drives to holodecks, replicators, and tricorders, the future is closer than ever. - Mr. Media Video Interviews

Ethan Siegel is a PhD astrophysicist, science writer, author, (sometimes) professor of physics and astronomy, and longtime Star Trek fan. He has written for Forbes, Scientific American, NASA's Space Place, and many other print and online publications. His award-winning science blog, Starts with a Bang, has been educating the world since 2008.