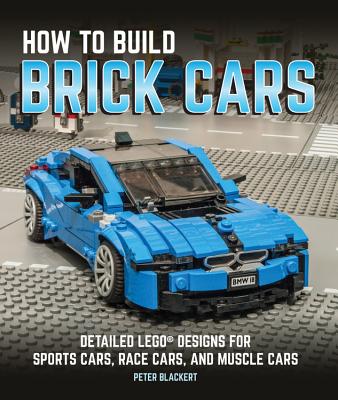 How to Build Brick Cars

How to Build Brick Cars shows you how to build tons of contemporary and classic sports cars entirely out of the world's favorite building block.

Ladies and gentlemen, boys and girls, start your engines and bust out your bricks! How to Build Brick Cars is here for the inner creative person in us all. Featuring over a dozen fully realized builds of classic and contemporary sports cars, race cars, and muscle cars, How to Build Brick Cars features a range of levels to challenge both LEGO newbies and the veteran block-slingers far and wide.

Readers will find detailed, full-color illustrations and step-by-step instructions for such classic and contemporary vehicles like:Featuring informative and historical text about each car and designed exclusively by Ford Motor Company vehicle designer Peter Blackert, How to Build Brick Cars will keep you busy from the flip of the first page to the end of the race track!

Peter Blackert is the most prolific vehicle builder in the LEGO community. He has built thousands of cars from LEGO over the years, drawing on his experience as a Powertrain & Chassis Systems Engineering Architect for the Ford Motor Company. His Bugatti Veyron, featured in his first Motorbooks title How to Build Brick Cars, was listed #5 in TopGear magazine's “Ten Greatest Replica Lego Cars” in 2014. His work has also featured regularly in articles on LEGO fan sites, such as brothers-brick.com and TheLegoCarBlog.com, and car-club magazines. Peter's work can be found on Flickr under the username lego911, and on Instagram under lego__911. His second Motorbooks title How to Build Brick Airplanes published in 2018. He lives near the beach in Australia with his wife and three kids, and a large room full of LEGO bricks.