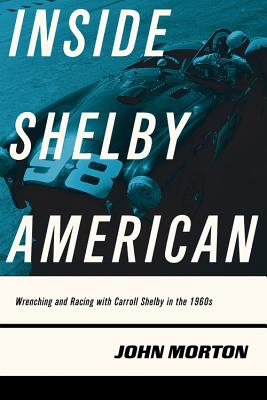 Wrenching and Racing with Carroll Shelby in the 1960s


Praise For Inside Shelby American: Wrenching and Racing with Carroll Shelby in the 1960s…

"In addition to being handy behind the wheel, Morton also knows his way around a computer keyboard. He knows how to put a good lap together - and a good sentence. These dual skills make Inside Shelby American an easy, enjoyable read... it's charming and self-effacing and well worth your time." - Keith Martin's Sports Car Market

"Inside Shelby American is more than just a well-written telling of Morton's early racing career. It's an incredible, no-holds-barred look into the goings-on at Shelby American. Never before have we read such an insider's guide to the Shelby American saga. Call it a must-read for anyone who loves Shelby cars and wants to hear more than what has been sanitized by PR folks." - Classic Motorsports

"It's almost as if you're sitting down with Morton over a beer as he tells his tales without getting bogged down in detail or nostalgia. Funny, exciting and very entertaining. This book is a great gift for any Shelby or racing fan." - The Virginian Pilot

John Morton moved to California from Illinois in 1962 to enroll in Carroll Shelby's driving school at Riverside. After completion, with Peter Brock having been his instructor, John asked Shelby for a job on the racing team. He progressed from shop janitor to team driver in 1964, launching a career that spanned over forty years and joining the Shelby team at the most successful period in its history. In the early 1970s, John drove for Brock's BRE Datsun team, winning two National Championships and two 2.5 Trans-Am Championships. Career highlights include nine drives with two class wins at Le Mans and two GTP victories at Riverside, including the last sports car race at the facility in 1987 in a Group 44 Jaguar. Morton resides in El Segundo, CA.