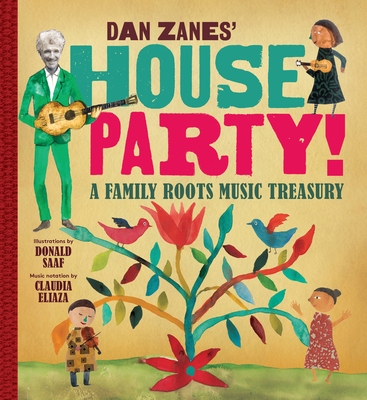 In Dan Zanes' House Party!, the Grammy Award-winning children's artist presents a huge collection of folk songs along with inspiration to start your own family band.

Too often, new parents eager to share their love of music with their young children feel their options are limited to cuddly singing dinosaurs and well-meaning humans whose understanding of children’s music starts with “Kumbaya” and ends with “Puff the Magic Dragon.” For many sane adults, these choices are more abrasive than the most aggro noise-rock of their college years.

Dan Zanes has spent the past 20 years creating a truly compelling body of children's music that music-loving parents can also get behind. A former 1980s indie rocker, Zanes' 13 children's albums have gained wide praise for their authentic arrangements and preservation of America's folk traditions.

In Dan Zanes' House Party!, the Grammy Award–winning Zanes has curated a rich selection of folk songs that comprise an essential musical cross-section of the American experience and its multicultural, immigrant underpinnings. The selections include the standard songs we all know and love, along with folk classics. Each song is accompanied by a brief narrative on its historical context, followed by lyrics, notation, and chords. Among the songs you'll learn to play: "Erie Canal," "Pay Me My Money Down," "Titanic," "Waltzing Matilda," "The Farmer Is the One," "Wabash Cannonball," "Sloop John B.," "Old Joe Clark," "Skip to My Lou," "King Kong Kitchie," and "We Shall Not Be Moved."

Dan Zanes' House Party! also includes informational sidebars throughout to give families the basics needed to pick up instruments and learn to more fully enjoy music as a family band. And in the back of the book, you'll find chord charts for guitar, ukele, and mandolin. More than just a collection of songs, Dan Zanes’ House Party! is part music book, part history lesson, and a work that all families can enjoy—together.