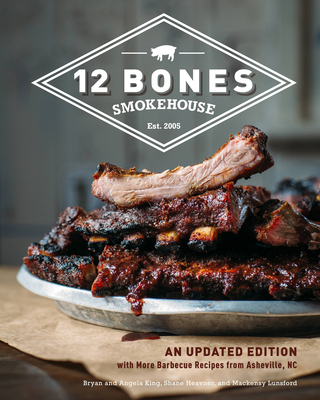 An Updated Edition with More Barbecue Recipes from Asheville, NC

In this newly updated edition of 12 Bones Smokehouse, you won't have to wait until your next trip to the restaurant to sample some of your favorite BBQ mains and sides. You'll find recipes that draw inspiration from all over the South (and sometimes the North), from old family favorites to new recipes invented on a whim. You'll enjoy page after page of the classics as well as 12 Bones' most popular specials and desserts, including:

Spark the smoker and light up the grill; it's time to make the most flavorful meals you've ever had.

Bryan King is co-owner of 12 Bones Smokehouse with his wife Angela, and where Shane Heavner is the head chef. Over the past decade, 12 Bones has quickly grown into an Asheville institution known best for its rule-breaking take on barbecue classics, such as their Blueberry Chipotle Baby Back Ribs. The restaurant has been featured in a variety of national media, from magazines like Southern Living and Garden & Gun to television networks like ABC, NBC, and the Travel Channel.

Angela King is the co-owner of Asheville, North Carolina's 12 Bones Smokehouse with her husband, David. 12 Bones has spent the last decade growing into a local institution by breaking the rules of barbecue. The restaurant has been featured in a variety of national media, from magazines like Southern Living and Garden & Gun to television networks like ABC, NBC, and the Travel Channel.

Shane Heavner is the head chef of 12 Bones Smokehouse. Of the eatery, Bon Appétit wrote, "Everything here is amazing, from the ribs to the corn pudding, but the BLT is ridiculous: house-cured brown-sugar bacon, fried green tomatoes, and pesto mayonnaise on thick slices of wheat bread." Southern Living said, "Blueberry-chipotle ribs—blasphemy or bliss? It's hard to imagine the traditional Southern favorite tweaked to such fruity/spicy terms, yet the taste is terrific."

Mackensy Lunsford is a food writer, journalist, and a former chef and restaurant owner. She has covered southern restaurants for a variety of independently-owned media and more recently for Gannett newspapers. She has won numerous journalism awards from The North Carolina Press Association and is a first place national award winner for food writing from the Association of Alternative Newsweeklies. Lunsford also writes and develops recipes for The Coca-Cola Company.