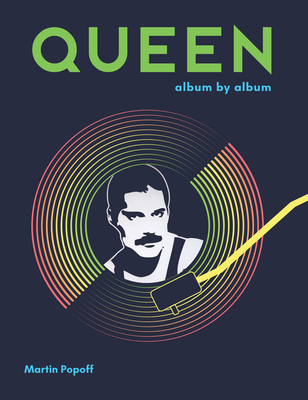 A thoughtfully curated and gloriously illustrated retrospective of the band’s studio releases, Queen, comes just in time for the 45th anniversary of their debut LP and biopic.

Formed in 1970, Queen went on to become one of the most popular—and most successful—rock bands of all time. Even following the untimely death of beloved and magnetic frontman Freddie Mercury, and nearly 50 years after their formation, interest in the band has continued, evidenced by scores of reissues, arena tours with surviving members, and a feature-film biopic.

In this new installment in Voyageur Press’s Album by Album series, rock journo Martin Popoff convenes a cast of 19 Queen experts and superfans to discuss all 15 of the band’s studio albums (including their soundtrack for the 1980 film Flash Gordon). Panelists include Queen experts, rock journalists, musicians, and record industry figures. The results are freewheeling discussions delving into the individual songs, the circumstances that surrounded the recording of each album, the band and contemporary rock contexts into which they were released, and more.

The engaging text of this beautifully designed book is illustrated throughout with rare live performance and candid offstage photography, as well as scads of rare Queen ephemera.

The Album by Album series is a unique approach to the rock bio, injecting the varied voices of several contributors. The results have even the most diehard fans rushing back to their MP3 players (or turntables) to confirm the details and opinions expressed!

Praise For Queen: Album by Album…

Popoff both loves and knows the material and chronicles a recording career through an ongoing conversation between the author and a cast of interesting characters, including rock critics, producers and musicians. —Shepherd Express

It’s fascinating to read the back and forth...and it strikes a good balance for both the casual and die hard fan. And as with any good book of this type, makes the reader want to go back and revisit (or visit for the first time) many of the non-hits.—HoustonPress.com

a fine approach to a musical biography of a band rather than an individual, as it allows for a broader scope of discussion among the members themselves, their contemporaries and musical progeny, as well as rock journalists—Spectrum Culture

Martin Popoff has been described as the world’s most famous heavy-metal journalist, though he has covered plenty of Punk and New Wave albums in his career of 7,000-plus album reviews. He has penned many books on various bands, genres of rock, and record collecting, including Voyageur Press’ Rush: The Illustrated History; Metallica: The Complete Illustrated History; The Art of Metal; and The Big Book of Hair Metal. He has also worked on film documentaries about Rush and ZZ Top. Popoff lives in Toronto.