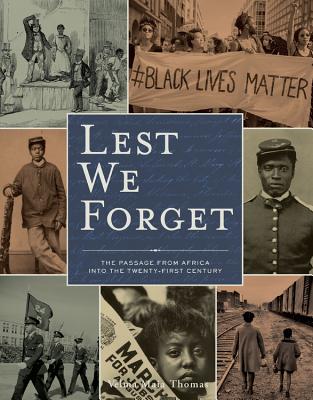 The Passage from Africa into the Twenty-First Century

Presented in three parts—Lest We Forget, Freedom’s Children, and We Shall Not Be Moved—the history comes to life through 5 interactive items attached to the pages throughout, along with 10 more pieces of removable memorabilia contained in an envelope at the back.

Lest We Forget. Based on materials from the nationally acclaimed Black Holocaust Exhibit, Lest We Forget documents the plight of an estimated 100 million Africans, from their rich pre-slavery culture to their enslavement in a foreign land. This collection of stirring historic papers, memoirs, personal effects, and photographs presented alongside moving commentary chronicles the unyielding strength of a people who refused to be broken.

Freedom’s Children. Taste the sweetness of freedom and the bitter struggle for equality through the documents that impacted the lives of an entire race. Freedom’s Children vividly presents the heart-wrenching and inspiring account of freedmen and freedwomen during Reconstruction and into the twentieth century.

We Shall Not Be Moved. Throughout the twentieth century, African Americans would trouble the waters of America—agitating, challenging, and defying the status quo. We Shall Not Be Moved chronicles the struggles and triumphs of African Americans leading up to and during the Civil Rights Movement. Feel the strength of those entrenched in the fight for justice up through the twenty-first century in an afterword that includes the election of America's first African American president and the beginning of the #BlackLivesMatter movement.

Make a personal connection with black history as you unfold a receipt for a five-year-old girl sold for one cent, hold a freed slave's manumission papers, flip through a deposit book for a savings account at the Freedman's Savings and Trust Company, read a letter home from one of the first black army nurses sent overseas during WWII, and open a list of rules for lunch counter sit-ins distributed by a Nashville student in 1960. A foldout timeline gives a chronology of the African American history and experience. The additional removable replica artifacts allow you to hold in your hand:

With this richly designed and illustrated book, take an intimate, tangible, and unforgettable journey through more than 400 years of black history.

Praise For Lest We Forget: The Passage from Africa into the Twenty-First Century…

Lest We Forget“This richly designed historical document is an ingenious, interactive, three-dimensional experience that dramatically addresses the painful history of America and the slave trade. Based on the Black Holocaust Exhibit, Lest We Forget is history brought to life by Velma Maia Thomas, curator. Accompanying the book’s documents, Thomas’s exquisite prose is interwoven with the moving words of slaves themselves.” —Ingram

“No matter how much one has read about the degradation of slavery, the images and the words in this book will have a firm impact on its audience. A three-dimensional interactive book, it contains reproductions of photographs and documents from the Black Holocaust Exhibit that was conceived and developed by the author. By combining highly effective and readable text with photographs, news clipping, drawings, and facsimiles of documents, Thomas shares with her readers the details of virtually every aspect of slave life from the horrors of slave ships to the dangers of trying to escape. Throughout the assortment of pop-out and pull-out replicas, points are raised that will lead to classroom discussion. With its inclusion of documents such as a receipt for a slave woman or the freedom papers of a former slave, those discussions will be given an added dimension.” —School Library Journal


One of The Root's Favorite Reads of 2019—Jay Connor, The Root

Velma Maia Thomas is the author of several nonfiction books on African American history. Maia served as manager of the Shrine of the Black Madonna Bookstore and Cultural Center in Atlanta, Georgia, from 1987 to 2000, where she created the nationally acclaimed Black Holocaust Exhibit, a collection of original documents on slavery in America.

A gifted writer and public historian, Maia was one of 100 distinguished Americans selected to contribute to Lift Every Voice and Sing: A Celebration of the Negro National Anthem. She also was selected to write the introduction to Finding a Place Called Home: A Guide to African-American Genealogy and Historical Identity. Her work The Odd Fellow City: The Promise of a Leading Black Town was published in the Journal of the Georgia Association of Historians. She also served as a subject expert for the PBS documentary, Underground Railroad: The William Still Story, which aired nationally in February.

Maia holds a bachelor's degree in journalism from Howard University, a master’s degree in political science from Emory University, and a graduate-level certificate in Heritage Preservation from Georgia State University. She has served as keynote speaker at universities, libraries, and museums across the nation and has served as a distinguished scholar at the historic Penn Center on St. Helena Island, South Carolina. Maia has been interviewed by the New York Times, The Atlanta Journal and Constitution, and the British Broadcasting Corporation.

She continues to write, teach, and speak on African American history, using her engaging style to bring history to life.